Racing games are best played with a controller, that’s a fact. Analog sticks allow more precise, delicate turning, and the controller triggers help you truly put the pedal to the metal. This applies to Rocket League, too, especially now that the high-octane free-to-play game of “soccar” has even become an esport!

However, finding the best Rocket League controller settings is a different story. There are many parameters you need to tweak to get the perfect balance of control and responsiveness. We’ll guide you through everything you need to know to set up Rocket League and start climbing the ranks.

Why Change the Controls in the First Place?

Rocket League is an incredibly fast-paced game. There’s no speed limit, the cars can fly, double jump, and do somersaults in the air. A typical goal in Rocket League flies in at over 60 miles per hour, in a sort of blink-and-you-miss-it situation. Therefore, you want your controls to match that pace.

When you’re just starting with this game, the default Rocket League settings are just fine. More than fine, really. The control scheme is excellent and what most people are used to if they previously played any racing games. But, as your skill grows, you’ll require tighter turning, multitasking without taking the right thumb off the camera controls, and an alternate button layout.

This isn’t just about copying other people’s setups, or using “what pros use.” At higher levels, Rocket League demands the fastest possible reaction time from you, and the adequate level of sensitivity isn’t optional. That’s why we’re going to tweak a few settings in the game.

Setting Up Your Controller for Rocket League

Before we delve further into changing the Rocket League controller settings, let’s first ensure everything works properly. Obviously, if you’re playing on a console, you’ll want to use its official controllers. Then, ensure that your PlayStation, Switch, or Xbox controllers are synced properly and show up in the dashboard. Finally, if you plan on playing wirelessly, charge the controllers fully before booting up Rocket League.

On a PC, the default input method is mouse and keyboard. Luckily, Rocket League can detect both Xbox and PlayStation controllers, so it’s just a matter of connecting them through Bluetooth or USB and going through the basic checkup in the Windows control panel. Again, charge your controllers if you’re using them in wireless mode.

Now that we’ve done the basic setup for our controllers, let’s start tweaking the settings for optimal gameplay. For that, we’ll be heading into the Settings menu in Rocket League and moving onto the Controls tab.

The rule of thumb is as follows: Whenever you change any of these settings, give them a try in training mode. While the ones described below are widely considered optimal, everyone’s playstyle and control preferences differ, so adjust them as you go.

Going one by one, we’ll be changing several settings:

This determines how quickly your car turns. You want the maximum grip, so put it at 1.

This affects the car’s turn rate while in the air. The best Rocket League settings for this are at the lowest possible, but feel free to bump it up slightly if you want faster aerials.

The deadzone is the controller's sensitivity. Setting this to a higher value means you won’t accidentally steer your car, but most pro players keep this very low - sometimes at just 0.05, so they can make quick steers. Start at 0.10 and see how it goes.

Similar to the controller deadzone, the dodge deadzone affects sensitivity when performing flips. Higher values allow more controlled aerials, without the risk of flipping your car instead.

Unlike the Rocket League deadzone settings, vibration doesn’t directly impact your car’s handling. Instead, disabling it will help you focus better. Of course, you can keep it on if it doesn’t bother you.

This is the default setting, so we’ll keep it that way. Toggling between the free camera and ball cam helps when you’re dribbling, for example, but learning when to toggle is a skill of its own.

Once you’re finished setting everything up, your screen should look like the picture below. Keep in mind that these are just recommendations. Experiment, test out variations, and find what works best for you. 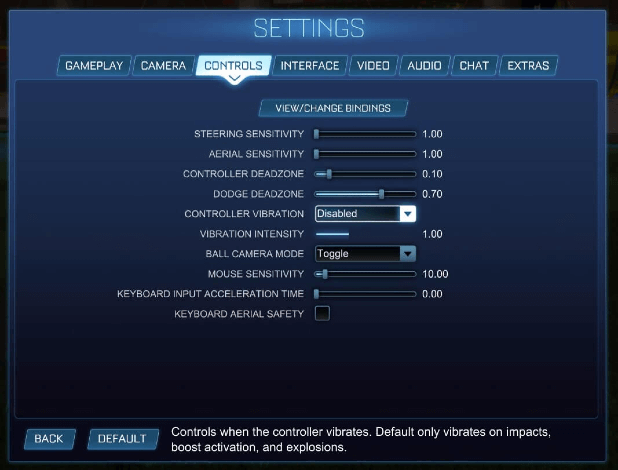 We’ve updated our controller software, got them recharged, and set the deadzones. But we’re not done yet. The final step is to rebind the controls for easier reach and improved multitasking. Remember, this is a game where you’re regularly pressing several buttons at once, all while navigating a flying car.

We’ve mentioned that the default control layout in Rocket League isn’t ideal for improving your skills. How’s that? By default, the face buttons are used for jumping, power-sliding, boosting, and air control. However, your right thumb controls the camera, meaning you can’t look around while drifting and boosting.

There isn’t a single set of key bindings that’s the absolute best controller settings for Rocket League. You might find the default layout perfect for your play style. Switching your control specs after pouring hundreds of hours into the game is tough. Therefore, we’ll discuss the recommended setup many high-ranking players prefer, so you can use them from the get-go. 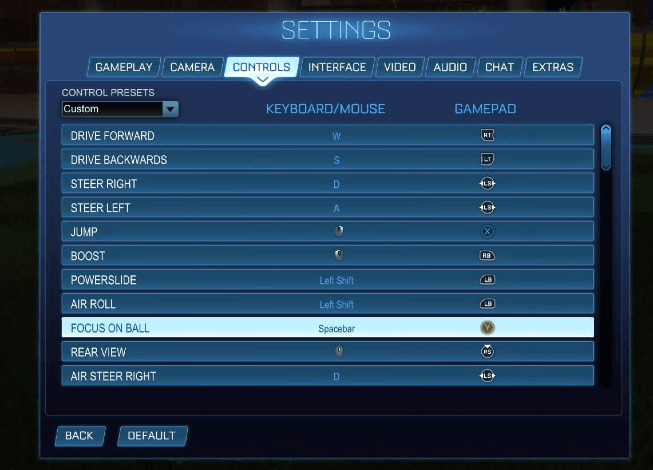 That’s how you set up your controller for the ultimate Rocket League experience. As the meta changes and your skills improve, you’ll want to tweak some of these settings. Lastly, it’s all about putting in the practice, no matter if you’re playing on default, custom, or pro Rocket League controls. Just grab your favorite gaming controller, test, and adjust these settings and layouts until you find what works best for you. And, of course - GL HF!

This should be kept fairly low, as you want your car to not spaz out whenever you push the stick in any direction. To mitigate low sensitivity, set the deadzone to a lower value, so there's a smaller delay between the command and the car’s reaction.

What controllers do RL pros use?

What are the best controls for Rocket League on Xbox?

You want easy access to all buttons without having to move your fingers around. Therefore, set LB and RB buttons to powerslide and boost, while keeping the jump command on one of the face buttons. For Xbox, the ideal configuration is to put it on either the A or X button.

What is the best controller deadzone in Rocket League?

Most professional players agree that the deadzone shouldn’t go very high, so the game can react quickly to your inputs. Overall, the best Rocket League controller settings keep the deadzone at 0.10 or even lower.

Microphones for Gaming in 2022 – Hear The Difference!
Read more

Keyboard and Mouse vs. a Controller – What Is the Ultimate Gaming Setup?
Read more