How To Sync the Xbox One Controller - A Hands-On Approach

You’ve just bought a brand new Xbox console or got one as a present, and you’re impatient to try it out, but there’s one problem: How do you sync an Xbox controller with the console? And to add to the headache, you have no idea how to connect it to your PC either. Don’t worry; it isn’t that difficult at all.

Playing on a Console

You can sync your controller with your Xbox console by using a cable or without one. In this section, we’ll discuss both options.

How To Sync an Xbox One Controller Wirelessly

One of the significant benefits of an Xbox One wireless controller is that you can enjoy playing games from the comfort of your couch. You can apply the solution we’ll describe here to Xbox X|S controllers as well since the technology is compatible.

Before you begin syncing, check if your controller has brand new or freshly recharged AA batteries in it. Then press the Power button on your Xbox controller to turn it on. The Power button has the Xbox symbol on it.

Next, press the Xbox symbol on the console to activate it. You can locate it on the front side of the console.

Now that both the console and the controller are turned on, you can proceed to connect the Xbox One controller with your console by pressing the Bind button on the console. It’s a round button at the lower-right corner of your Xbox One X|S console’s front side, just under the Power button. 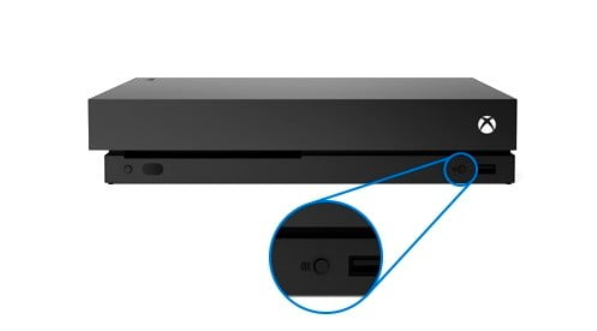 Note that its predecessor, the Xbox One, has the Connection button on the left side, close to the disc tray. Once you press it, the Xbox symbol on the console will flash. 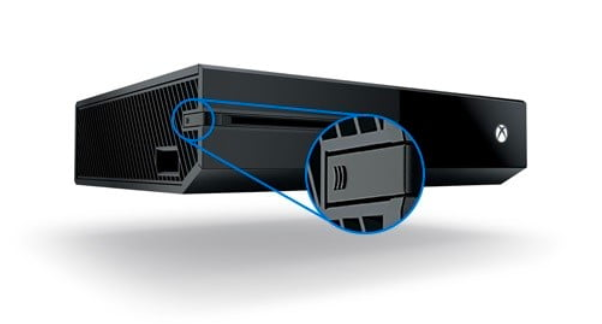 Now you’ll have about 20 seconds to pair the Xbox One controller with the console. Press and hold the small Bind button on your Xbox One controller for a while. Now its Xbox symbol will start blinking as it attempts to pick up the signal from the Xbox console and remain solid when it connects. 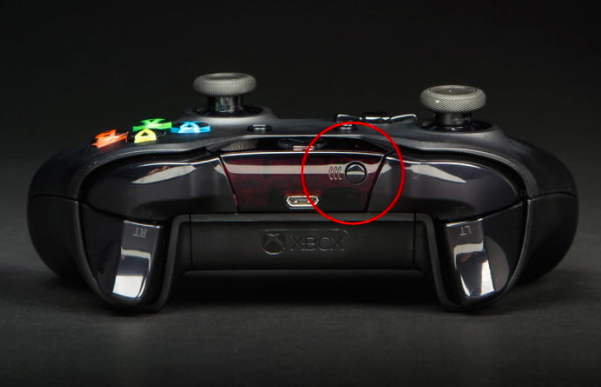 That’s it! You can connect up to eight controllers this way. And if, for some reason, this doesn’t work for you, there is another option, namely, using a USB cable to sync your Xbox and controller. Let’s see how that works.

How To Sync a Wireless Xbox One Controller Using a Cable

Xbox controllers arrive with a Micro-B USB cable, which you can also use to sync them with your console. After you plug one end of the cable into the controller’s USB port and the other into the console, press and hold the Xbox button on the controller for a few seconds, and they will automatically sync. Afterward, you can unplug the cable and enjoy playing games wirelessly.

A bonus of using a cable is that it can also serve as a source of power for the Xbox One controller. You don’t even need batteries inside.

Start by pushing the Xbox button on the controller. It’ll open the Settings menu on your screen. On the left side, select the Kinect and Devices option and press the Devices & Accessories/Controller button. Here you can see on which profile every controller signs in.

Another important software option you should know about is updating the controller’s firmware, which is especially useful if the Xbox controller won’t connect and sync. If you’re wondering how to sync your Xbox One controller and why the method we’ve described above doesn’t work for you, note that using an older version of firmware may cause software issues. 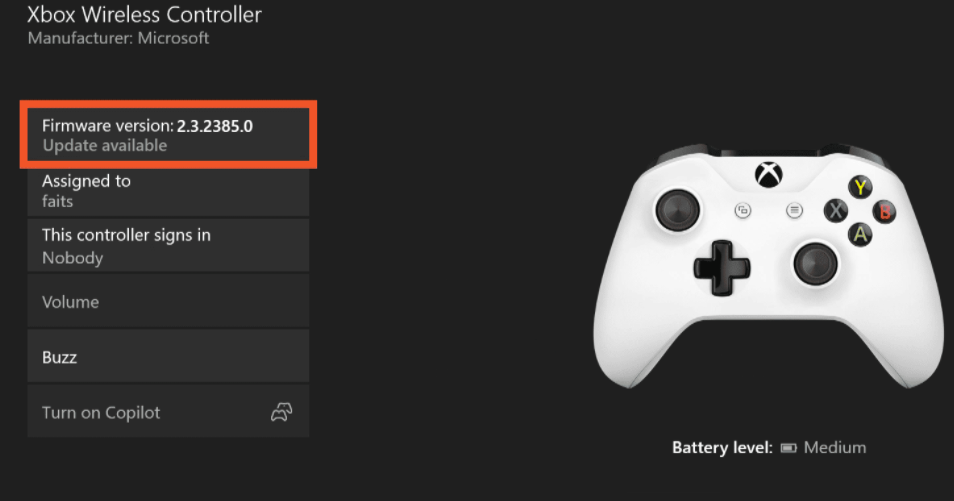 To update it, go to the Settings menu, then Kinect and Devices, and select Devices & Accessories/Controller. Here, you’ll see all synced controllers, so go ahead and click on one. Under a new menu, choose Ellipses below the Controller button. It’ll display the firmware version. Check if there’s an update of that version and install it.

Apart from getting you addicted to video gaming, one of the ways your Xbox can cause you headaches is by not syncing properly with the controller.

While you don’t have to be a rocket scientist to learn how to sync an Xbox One controller to your Xbox, wireless syncing can get tricky. Make sure there’s no obstruction from other electronic or wireless devices, such as a microwave or a radio. Also, check if there aren’t any solid objects in the way between the console and the controller. They will weaken your connection signal.

Metal next to the console or controller can also disrupt the signal, so keep it out of the way. The connection signal itself is strongest at a distance of up to 30 feet. Go any farther, and the signal will degrade.

When trying to sync an Xbox One controller to your Xbox for the first time, always keep backup batteries close at hand. If you are using rechargeable batteries, check if they’ve been fully charged. Millions of people take care of electric cars, but all we gamers need for a good ride is to recharge a couple of AA batteries. And if you use an Xbox One wired controller, make sure the cable is not damaged and that it’s properly connected.

A simple trick that’ll often help is to turn off your Xbox console, then turn it on to reset the system. To do this, press and hold the Xbox button on the console for 10 seconds. Remove the cable for half a minute, put it back in, and activate the console.

If you’re wondering how to sync a second Xbox One controller, the process is the same. Hit the Bind button on your controller and the Bind/Connect button on the console. You can sync up to eight controllers this way. If you have more than one Xbox console, the controller will attempt to sync to the previously connected system.

Playing on a PC

The Xbox One controller is one of the best PC controllers on the market, and Microsoft has provided several ways to connect it to a computer. It’s not a complex process, but it’ll take some fiddling.

Connecting an Xbox controller to a PC is a cakewalk with a Micro-USB cable or a USB-C cable for the Xbox X|S series. Put one end of the cable into the front USB port of the controller. Insert the other end into a USB port on your computer or laptop. Press the Xbox symbol to activate it if it doesn’t happen automatically. Windows 10 immediately identifies the controller, while older versions of Windows will first download and install the needed Xbox One controller driver. 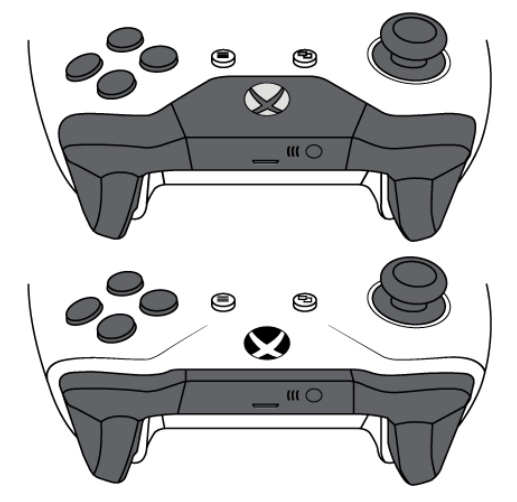 Once you pair the adapter with the computer, go to the Settings menu, click on Devices, and select Bluetooth & Other Devices.

Wondering how to sync the Xbox One controller from there? It’s simple. Just click on the Bluetooth slider to activate this connection and select the Add Bluetooth or Other Device button. From the menu, click on Bluetooth, then press the Xbox button to turn on the controller. Press and hold the small round Bind button located at the front. Hold the Bind button until you see the Xbox button blinking. The Xbox controller will appear in the Bluetooth list. You can now select it and start playing games.

How To Sync an Xbox One Controller to a PC Adapter

When you connect the adapter to the USB port, Windows will automatically download the necessary drivers. (A word of advice - a UPS can help with updating drivers and avoiding software issues.) Then press and hold the button on the adapter until a light turns on.

We hope that this short guide has answered your question of how to pair an Xbox One controller in full and that all that’s left for you to do now is sit back in your comfortable gaming chair and answer that one remaining dilemma: “What should I play today?”

Why is my Xbox One controller flashing and not connecting?

How do I sync my second Xbox One controller?

You can sync the second Xbox One controller the same way you synced the first one - by using the Bind/Connect option on both the console and the controller.

Why is my Xbox controller not connecting?

Check if the controller’s battery is full, keep your distance within 30 ft from the console, and make sure you have the latest controller firmware. For more detailed instructions, read our article on how to sync the Xbox One controller.

How do I pair an Xbox One controller?

Once you turn on the console and the controller, press the Bind/Connect button on the console. Then press and hold the Bind button on your controller for a couple of seconds. It should be enough to sync and pair it to the Xbox console.

Best PC Controller Out There in 2022: Lead the Charge
Read more