How Does a Mechanical Keyboard Work? A Comprehensive Guide

Today we’ll answer two of the most frequently asked questions related to mechanical keyboards: How does a mechanical keyboard work, and why does it make a clicking sound when used? But first, in case you were living under a rock, we’ll cover the basics.

What Is a Mechanical Keyboard?

For a more modern and relevant example, we don’t have to go that far back. Most mechanical switches in use today are based on Cherry's patent from 1973, and around that time, the first mechanical keyboards started appearing.

Before manufacturers started producing much cheaper and easier-to-build rubber-dome-switch keyboards, they tested different types of switches. The first mechanical switch keyboard would be UDS Comtest CEX-17C, made in 1980. It uses M6 and M7 switches developed by Cherry.

Difference Between Mechanical and Regular Keyboards

While both keyboards have the same application and layout, this is where the similarities end. They are produced and function in entirely different ways.

How a Regular Keyboard Works

Before we start, let’s address a common misconception: Membrane and rubber dome keyboards aren’t the same. The confusion arose because most modern keyboards use both membranes and domes. However, although modern keyboards can be considered a hybrid, this doesn’t mean the terms can be used interchangeably. Keyboards can still be exclusively rubber-domed or membrane keyboards. 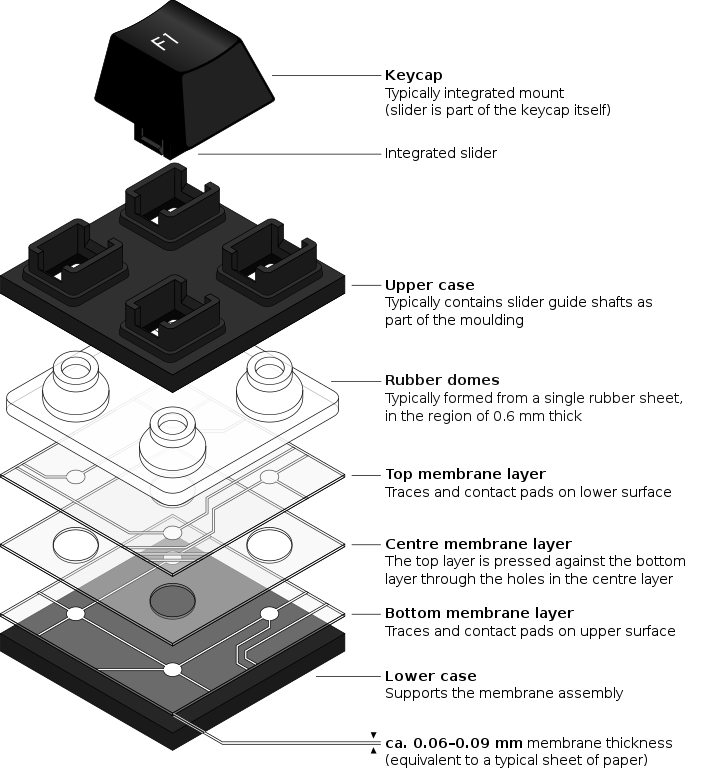 Membrane keyboards consist of three membrane layers, two of which are conductive. The middle one is a non-conductive separating layer with space in between for two conductive layers to meet when the “button” is pressed.

They don’t have regular input buttons like today's keyboards. In most cases, it’s just a membrane, like you can find on most microwaves.

As mentioned, most modern-day regular or “normal” keyboards use a combination of both rubber dome and membrane keyboard designs. The rubber switch pushes on the first membrane layer, which pushes on a final membrane layer, completing the circuit. Keys can be removed to provide easy access for cleaning your keyboard, even on a laptop.

These keyboards are cheap and easy to manufacture and, due to the layered approach, more resistant to accidental liquid spills, but they have some drawbacks. Pressing a key won’t provide any tactile feedback or audible click like a mechanical keyboard would, and pressing three keys on the same matrix would cause the keyboard to lock and refuse any additional input.

How a Mechanical Keyboard Works

As their name suggests, mechanical keyboards use a mechanical switch to send a signal when you press a key. Most mechanical switches also provide an audible and tactile response a great many users enjoy, but if you are not a fan, you can always adjust how your keyboard works by changing the switches.

When you press a key on the mechanical keyboard, the switch will push on a spring which may provide a tactile bump and clicky sound. Most importantly, when the switch drops down, it will enable two metal plates or springs to connect and close the circuit, which is detected by the keyboard controller and registered as a key input.

When the user releases the button, the spring mechanism returns it to the original state and severs the circuit connection.

Due to the physical contact necessary for the keyboard to work, keeping it clean of any crumbs and debris is essential to prevent obstruction and the key from getting stuck. However, large keys like Space, Shift, Enter, etc., have a support bar, which can make removing and returning them difficult. We advise you to proceed carefully or give it to a professional.

No matter their manufacturer, all mechanical switches are color-coded to allow for easy visual recognition, but there isn’t an industry standard. So while both Cherry and Logitech have a red switch, they don’t have the same characteristics. If you plan to build your own keyboard, be sure to check the switch characteristics before ordering.

Mechanical keyboards can have clicky, tactile, and linear switches. We’ll cover the Cherry MX Blue, Cherry MX Brown, and Cherry MX Black switches. These different mechanical switches will allow us to cover all the basics.

Blue switches are tactile – i.e., provide special feedback when pressed – and create that distinct clicky sound that is automatically associated with mechanical keyboards.

To activate Blue switches, you don’t even have to press them all the way. The keyboard usually registers the keystroke around midway to the bottom. With a little practice, you’ll get used to stopping when you hear the audible click. This is why mechanical keyboards are better for any job involving a lot of typing, like writing or data entry.

If you aren’t a fan of the clicky switch and don’t want everyone to know you have a mechanical keyboard, then MX Brown Switches are perfect for you. Be aware that the key will make a clicking sound if you push it all the way down, i.e., “bottoming out.”

To avoid that, you’ll have to get used to recognizing tactile switch input and stopping before you bottom it out. Be aware that the tactile response on a Brown switch is very light, and it’s easy to miss when typing rapidly. If you are looking for a bit more resistance, you should look at either a Clear or Grey (Tactile) switch.

Black switches were one of the first mechanical switches to see mass production back in 1984. Over the year, small adjustments were made to the production material and the force needed to press the switch, but the mechanism remained the same.

The Cherry MX Black switch is a linear switch, which means it doesn’t produce audible sound, and there is no tactile feedback. Linear switches are as plain as they come and produce the same resistance from the moment you press them until bottoming out.

Linear switches come in many variants, with the only difference being in the force required to activate them. Just like the others, they are also color-coded to be easily identified. Some switches, like Red, are created as a limited edition or for a specific market.

The Pros and Cons of a Mechanical Keyboard

One of the key differences and advantages when comparing mechanical keyboards vs. normal ones is input rollover. Regular keyboards can only handle input from three keys at the same time if they are on the same matrix.

Anything pressed after the initial three buttons just won’t register or will show incorrectly. If you use a mechanical keyboard, all active keys will be registered correctly.

Mechanical keyboards are more durable than regular ones, and switches can last anywhere between 20 million and 100 million key presses. If the switch stops responding, you can just replace it instead of getting a whole new keyboard. The ability to change each key individually allows you to customize it to suit your needs, too. You can even use different types of switches across your keyboard.

Still, getting or replacing a mechanical keyboard isn’t what we’d call affordable at all. You can get a cheap mechanical keyboard for less than $50 on Amazon, but the price can easily go over $200 if you start customizing it. It also requires a lot more maintenance than your regular rubber dome keyboard, and it’s also more prone to shortcircuit if you accidentally spill coffee on it.

Should You Buy a Mechanical Keyboard?

With mechanical keyboards, it's usually either love or hate at the first touch. The best advice we can give you is to go to your local store and ask them if they have one you could try out. As writers, we are a bit biased, as mechanical keyboards increase our typing speed.

The biggest selling point of mechanical keyboards is that you can customize them to fit your aesthetic and ergonomic needs. Don’t like the feedback? Remove tactile switches and replace them with linear ones. Each key press will be exactly the same, and there won’t be any keyboard sounds. This personalization is what so many people have fallen in love with!

Keyboards don’t have an actual metric we can measure to tell you if one is better than the other. Most comparisons are based on the look and feel, which are a matter of taste. We are going to say yes because mechanical keyboards can be personalized to suit your needs, while regular keyboards can only be replaced as a whole if you don’t like just one thing about them.

What is the difference between a regular keyboard and a mechanical keyboard?

There are a couple of differences between the two. First, they use different switches and methods for registering input. Second, mechanical keyboards allow for key rollover, while regular keyboards have a limit of three simultaneous key inputs before locking up.

This is only the tip of the iceberg. If you want to read more, check out our: “How Does a Mechanical Keyboard Work?” article.

Why do people love mechanical keyboards?

How To Clean a Mechanical Keyboard: Everything You Need To Know
Read more

Keyboard and Mouse vs. a Controller – What Is the Ultimate Gaming Setup?
Read more

Gaming Laptop vs. Desktop: Which Is Better?
Read more
Leave your comment