How to Turn RTX on

What Is GeForce RTX?

RTX technology is exclusive to GeForce graphics cards. Here, we’re talking about the 20 and 30 series of GeForce GPUs. You’d be mistaken to think that you turn RTX on simply by having one of these beefy graphics cards on your PC. You also need to enable one extremely game-changing visual effect in supported games - real-time ray tracing.

Lighting is one of the most important components in video games. Until recently, manufacturers relied on numerous techniques to improve the visuals. But it was almost impossible to create convincing enough reflections and shadows. The arrival of the RTX graphics cards is hailed as the dawn of a new era. This is the holy grail of computer graphics. It’s available to everyone, and, even better, it runs in real-time.

Ray tracing is a complex algorithm that calculates how light behaves in the virtual world. When you enable RTX, you’ll immediately see some significant visual improvements. The reflections on shiny surfaces become more detailed, the shadows softer, and the mood of every scene is improved.

There is a caveat, though. Ray tracing in games is a very hardware-demanding process. Nvidia, therefore, puts separate RTX cores on its GPUs, and, for the best results and optimal performance, you’ll want to get the best RTX 2080 or even more powerful graphics card. Even with DLSS, another piece of Nvidia technology designed to improve performance and resolution, turning on ray tracing has a severe impact on performance. The frame rate dip is always noticeable, so it's a matter of choosing between performance and visuals.

The catalog of games with RTX support is growing daily. Nvidia keeps an up-to-date list of current and upcoming games on its website, with some upcoming titles like Dying Light 2 having already confirmed support for ray tracing.

Gamers began to wonder how to turn on ray tracing with Battlefield 5. The 2018 multiplayer FPS was a benchmark for this new technology. This was followed by the action-adventure Control, where we saw a more significant impact of RTX on the game's visuals. Remedy’s Control, which is set in an office space, featured numerous reflective surfaces and a lot of semi-transparent glass. Even without RTX, this is a visually impressive game. But when you turn the effects on, it’s absolutely stunning.

We also can’t forget two huge RTX games from 2020, Cyberpunk 2077 and Call of Duty Black Ops: Cold War. Both games relied heavily on ray tracing for atmospheric effect, especially the former. Turning RTX on in Cyberpunk 2077 turns Night City, the big sandbox playground you’ll be spending many hours in, into a vibrant neon wonderland. One could even say the game was designed with RTX in mind, as many streets are filled with glass skyscrapers and giant neon signs.

A few games are specifically built as a ray-tracing showcase. And then there is Minecraft RTX and Quake 2 RTX, which serve as some of the best examples of how the ambiance can be improved due to better lighting. And since Quake 2 RTX is completely free on Steam, there’s no reason to skip it.

How to Turn RTX On

There are a lot of misconceptions about what players actually need to do in order to see ray tracing in their games. Of course, the first step is to purchase a Nvidia GeForce GPU that supports it. If the graphics card is installed properly in your rig and your gaming PC runs on Windows 10, you’re all set.

After that, all you need to do is launch a game that supports RTX, check whether the effect needs to be manually enabled, and maybe tweak the details a bit. But PC gaming wouldn’t be PC gaming without different labels causing confusion and leaving everyone in the gaming community wondering how to turn on RTX. Generally speaking, the setting is usually within the advanced graphics options. You may see it labeled as “RTX,” “ray tracing,” or even “DXR,” which is short for DirectX Ray tracing.

Depending on the game, the settings for ray tracing and other RTX effects can include anything from a simple on and off function to various other details. In the aforementioned Control, you can select several levels of ray tracing detail as well as cherry-pick which of the effects you want to be on.

Once you turn RTX effects on, you can enable both solid and transparent reflections, diffuse lighting, contact shadows, and determine whether the debris is processed by the algorithm. It goes without saying that the more effects you have on, the bigger the impact on the game’s performance. A lot of games deal with ray tracing in a similar fashion, requiring a few user-selected effects for better optimization. 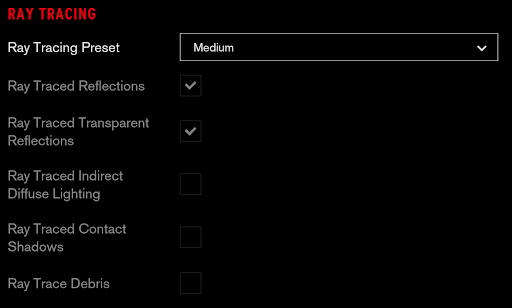 Quake 2 RTX is a bit of an outlier, and configuring it may be confusing. If you’re wondering how to turn RTX on in this game, you’re not alone. It turns out, the developers simply used different wording. To start with, in the options menu, set the renderer to RTX if it’s not already on. You also want to have “god rays” on, and then it’s just the matter of choosing the level of global illumination. This demo game runs great even on entry-level cards, so you won’t need the best RTX 2070 to achieve the best possible performance.

Lastly, there’s the highly popular Minecraft, which recently got a patch and official RTX support. Those trying to figure out how to enable RTX in this game need to have a Windows 10 version of it, which can be purchased through the Microsoft Store. Then, head to the settings menu, and under the Video tab, find the little switch for ray tracing. Underneath it is a slider for render distance, which you can play around with for optimal results.

You’ll also want to enable the Physically Based Rendering texture pack that drastically improves texture quality and enables transparent blocks. Finally, if you’re looking for worlds to play in, Nvidia provides several free maps in the marketplace. If you turn ray tracing on with these worlds and builds, you’ll immediately notice the impact of RTX even in a blocky game. Best of all, RTX players can still join their friends via cross-platform multiplayer and build together. 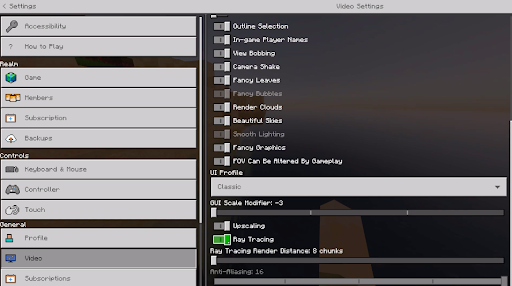 The list of RTX games is steadily growing. While there aren’t many games with ray tracing that you can play today, developers are working hard on implementing this technology with upcoming titles, as well as popular games that are already available. You can turn on ray tracing in the following games:

Is RTX a gimmick?

RTX is not a gimmick, and ray tracing has been a part of computer animation for a while. Turning RTX on for games greatly improves visuals. Our real world has a lot of reflections, and game developers are trying to recreate that in the virtual worlds. They traditionally relied on numerous techniques and tricks but were limited due to the processing power of GPUs in the past. It’s also easier for developers to implement ray tracing since computers can now calculate how far sunlight can reach. Thus, providing a more natural-looking scene.

How to turn on RTX in Minecraft?

Since December 2020, you don’t need any hacks or extra apps for Minecraft’s ray tracing. The game supports it by default. You’ll need to buy the game from Microsoft Store on Windows 10 and, of course, a GPU that supports RTX. Then it’s just a matter of flipping the switch in the settings menu and installing a free texture pack that enhances visual effects.

How do I know if my ray tracing is on?

The best way to determine whether ray tracing is turned on or off is through the reflections. Just find a puddle or any glass surface in the game. Once you learn how to turn RTX on, you’ll immediately notice that the reflections are sharper and more detailed.

How to Uninstall the Epic Games Launcher
Read more

How to Cancel PlayStation Plus
Read more