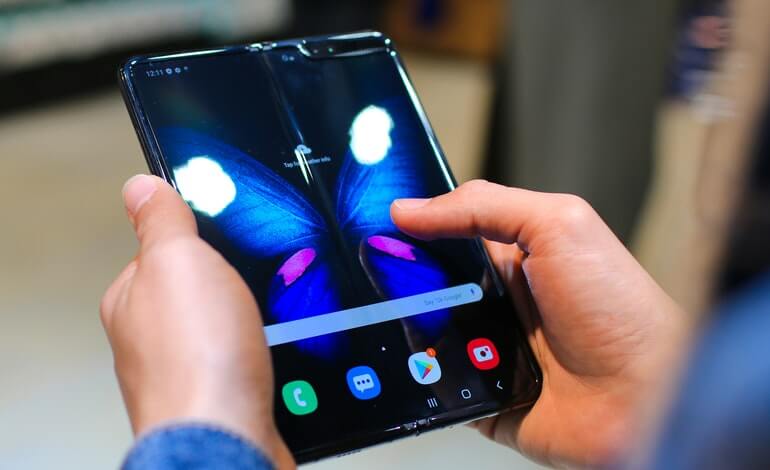 Folding your Samsung phone just once is so 2019. How about folding it twice?

The idea is exactly what Samsung presented at the annual Display Week conference. After managing to fold an OLED screen into two segments back in 2019, the South Korean tech giant has apparently found a way to turn a phone screen into three smaller ones by folding it one more time using an S-shaped hinge. This will, most likely, be the next standard for foldable phones.

The screen, Samsung says, is a 7.2-inch one when fully unfolded. As with previous foldable tech, this panel is based on organic light-emitting diodes (OLED), providing a crystal-clear image and high-contrast HDR. Since a lot of manufacturers are exploring ways of folding screens or turning phones into tablets, like TCL recently did with its DragonHinge technology, it’s natural that Samsung is looking into this field, too.

Samsung is investing a lot in its foldable tech. Aside from the still-unnamed phone prototype, the company is developing a smartphone with a display that can expand to reveal additional information or another app. Multitasking is, without a doubt, a big selling point for these devices.

Another foldable piece of hardware Samsung has unveiled recently isn’t a phone but a full-size laptop. The giant 17-inch screen folds in half, and it’s really a sight to behold. When completely unfolded, the panel is in the 4:3 format and works in both portrait and landscape orientation. With a quick move, you can turn it into a standard laptop that has a virtual keyboard on the lower half of the screen. It also has a built-in camera under the panel, ready for conference calls.

You can see the new tech in action in the company’s promotional video. More details about each of the devices are yet to be known, as well as whether they’ll actually become a reality. What’s certain is that none of these gadgets will fall in the budget-friendly price range, at least judging from how expensive the Galaxy foldables were so far.