What Is Gyro Aiming, and Is It Worth It?

Every gamer knows the importance of having good aim in competitive first-person shooters. If you can't hit your target quickly, you'll be dead in the water. But what's the best way to aim? Some people swear by using the mouse cursor to line up their shots, while others rely on a right analog stick, boosted with aim assist, for easier headshots.

However, there’s a way to bridge the gap between controllers and a mouse and achieve precision -  gyroscopic or gyro aiming. But, what is gyro aiming? Read on to find out!

What Is Gyroscope Aiming?

Gyro aiming is a technique used in first-person shooters and other games requiring precise movements. The basic idea is to use a gyroscope-equipped device to aim by tilting your controller. To explain this better, we’ll first answer the question, “What is a gyroscope?”

A gyroscope is a device that measures or maintains rotational motion. It is typically used in navigation and guidance systems, but also found an application in video games through gyro sensors that track the movement and orientation of gaming controllers.

This motion-related information can be used to control the game's objects and provide feedback to the player. Gyroscopes are also used in some virtual reality systems to track the user's head movements.

The gyroscopic effect occurs when a spinning object is turned on its axis. The force of the spin creates momentum that resists orientation changes. In gaming, this effectively stabilizes your weapon, making it easier to aim.

How Is Gyro Aiming Used?

For example, gyro aiming in Fortnite and similar shooters lets players make smaller, more precise adjustments to their aim while using the joystick for gross movements.

Through built-in controls in some games or external software on a PC, you can also use the right thumbpad as a flick stick, or flickstick as some gamers call it. Essentially, this lets you make fine aiming and camera movements with the gyroscope, while the thumbpad is used to “flick” your view to the left, right, front, or back at 90-degree angles.

Gyro aiming can also be used with head tracking in VR games to provide an even more immersive and realistic gaming experience.

A gyro controller can be a valuable tool for players of all skill levels. It can help newcomers to VR or console controllers get acclimated to the experience and make it easier to aim. For more experienced gamers, gyro aiming can provide a more natural playing feel and an edge in competitive multiplayer games.

How to Gyro - Setting Up Gyroscopic Controls in Games

Now that we’ve hopefully familiarized you with the general idea, how do you actually make use of gyroscope controls in games? Well, first of all, you’ll need a controller with a gyro sensor and a game that supports gyroscopic aiming.

Here’s the thing: not all game controllers have a gyroscope, and even if they do, the consoles they were made for can’t necessarily make good use of it.

For example, you may go through a lot of trouble setting up an Xbox 360 controller on PC and synchronizing it so that everything runs smoothly, only to find out that gyro aiming on Xbox controllers is a pipe dream, as they do not have a gyroscope at all.

In fact, this is one of the key differences between the Xbox and PlayStation controllers, as both the older DUALSHOCK and newer DualSense controllers for the PS feature motion control through a built-in accelerometer and gyroscope.

That said, just because a controller supports the tech doesn’t mean that gyro aiming on PS5 or PS4 consoles is widespread. In fact, you’d be hard-pressed to find games that natively support motion controls on the PlayStation, other than Fortnite gyro aiming, as well as implementation in a few other big hits such as Days Gone and Horizon Forbidden West.

On the other hand, it’s pretty much par for the course to use gyro controls on the Switch. Nintendo makes much better use of this technology in their popular handheld console, for everything from native titles like the Legend of Zelda: Breath of the Wild and Splatoon 2, to ports of legendary shooters such as Doom and Quake.

You’ll want to use gyro apps such as ReWASD or Steam’s controller API on a PC to make the most of your gyro controllers. These enable motion controls that approximate mouse movement even in games that don’t natively support gyro aiming, opening up a world of possibilities.

So, how does it all work in practice? Let’s first look at the gyro settings in Fortnite to illustrate how easy it is to set everything up when games natively support motion controls.

After that, we’ll look into Steam’s implementation to show you how you can use this innovative technology to revolutionize the way you use controllers, even in unsupported games.

Setting Up Gyro Controls in Fortnite

To enable both flick stick and gyro aiming functionality, simply find them in the game’s settings through the "Touch and Motion" sub-menu, where you'll find the toggles for both. 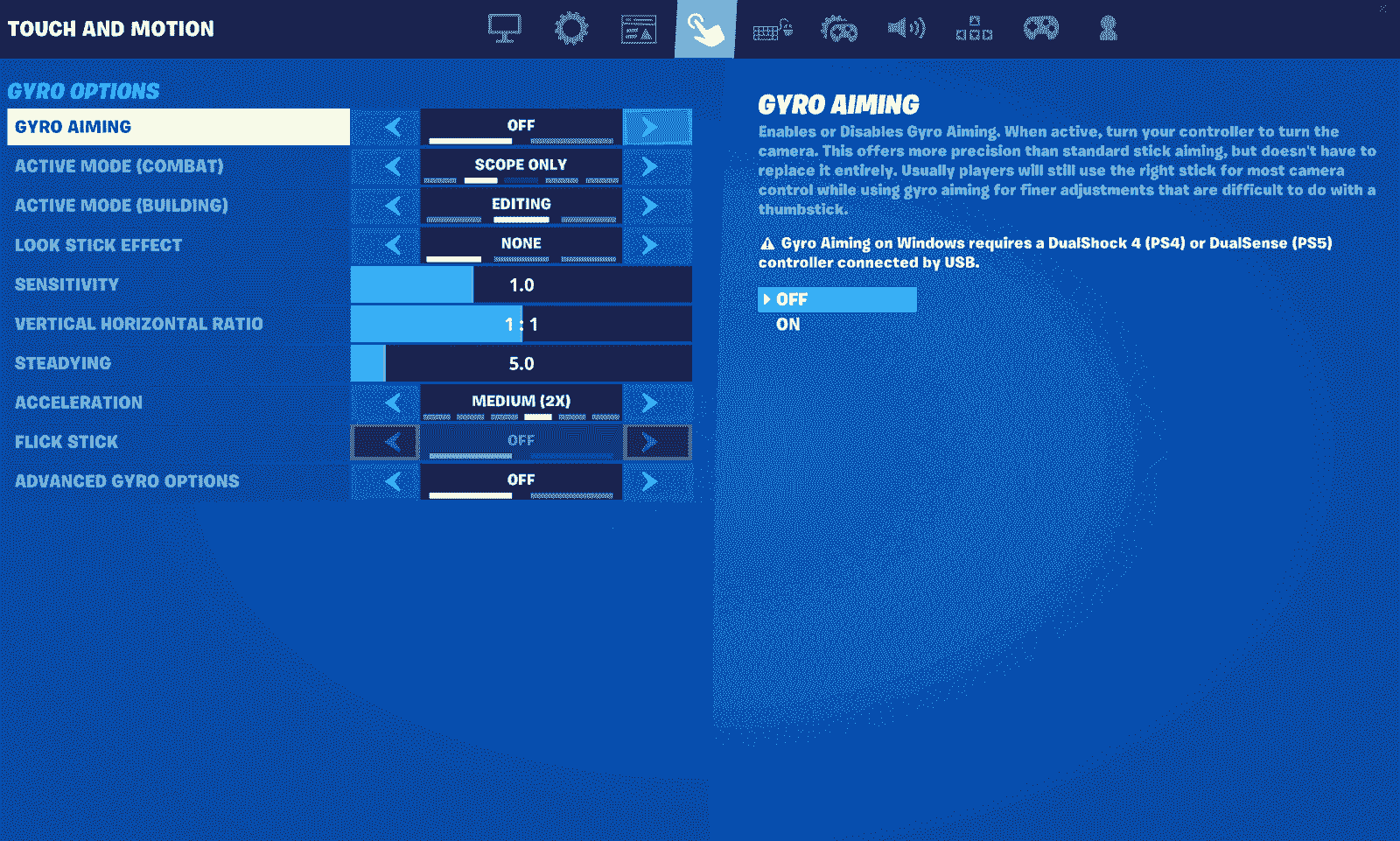 You can choose whether to have gyro aim on at all times (including when building structures) or only while aiming through a scope or for scoped and unscoped weapons. The best gyro settings will depend on your preferences, but we recommend setting it to Scope or Aiming to start with, so you can get used to the motion controls in combat first.

You can fine-tune motion and targeting sensitivity to get the perfect pinpoint control despite accidental movements from having an unsteady controller grip.

Remember, though: Aiming like this will only work if you have a supported controller, such as a Steam Controller, DUALSHOCK 4, or DualSense controller on PC or PlayStation, a Joy-Con, or a Pro Controller on the Nintendo Switch, or mobile controls on Android.

Setting Up Gyro Controls on Steam

As we’ve already mentioned, even a top-of-the-line controller for your desktop won’t do you any good if it doesn't include a gyroscope. Provided you are not using an Xbox, though, you’ll be able to get some pretty cool features out of your controller through Steam’s API. It even works for titles outside your Steam library, as long as they are run through Steam.

The genius software behind this functionality was originally written back when Valve was trying to popularize its ill-fated Steam Controller, but the crafty devs from the company have since used it as a base to improve the gaming experience on other controllers.

So, what is gyro aiming like through Steam, and how do you set it up? Well, first of all, you’ll need to get into Steam’s Big Picture Mode by clicking on it from the View menu or pressing the Home button on a PS controller or the Guide button on the Xbox controller. 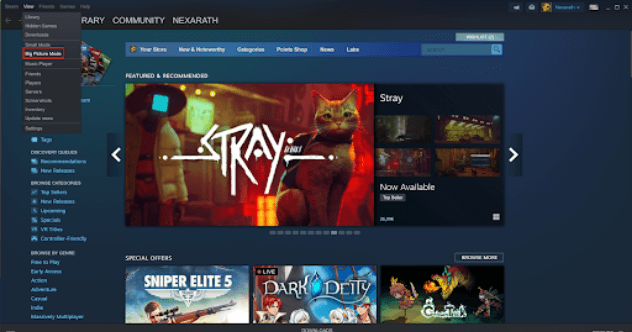 From here, click on the Library button to see your library of Steam games in Big Picture mode. 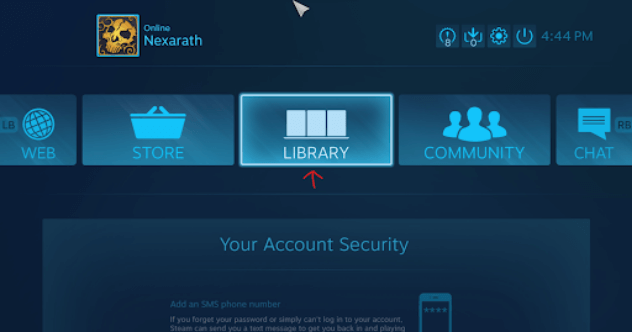 Choose your game and then click on Controller Configuration. 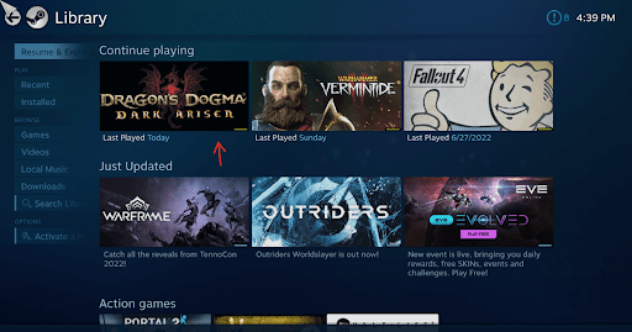 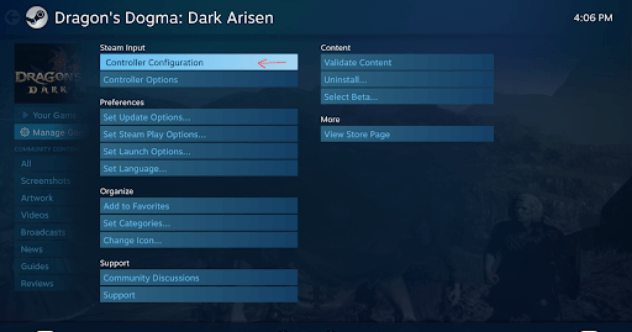 You should see the following menu: 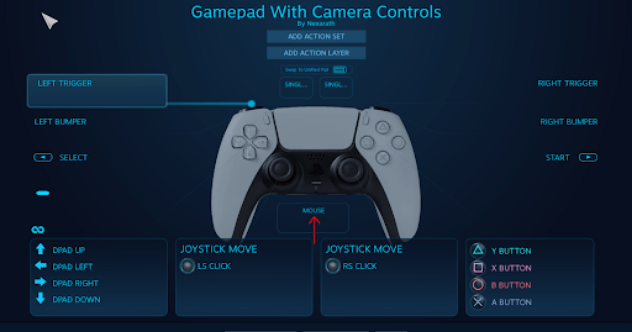 Aside from the ability to rebind every standard button and joystick function, you can also use the gyroscope on your device by clicking on the mouse section.

From here, you’ll be able to set up gyro sensitivity and whether it is set to “Always on” or only activated by a specific action, such as a soft trigger pull, as is shown below: 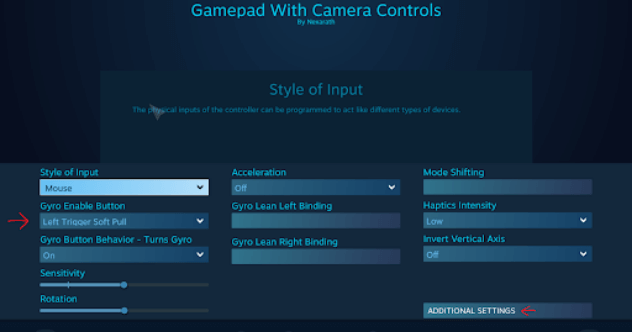 You can also click on the “Additional settings” button to set up advanced features such as whether a trigger press slows down the gyro speed, its lean point, steering axis, and more. 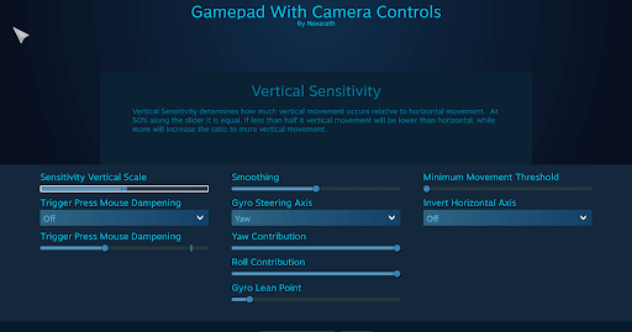 Although it has been available for years, gyroscopic aiming hadn’t really taken off with gamers until Nintendo introduced it as the primary control method for its smash hit Splatoon in 2015.

So, is gyro aiming any good, or is it just another gimmick? According to SONY, it may well be the latter, but ask almost anyone who tried gyro gaming on Switch or Steam, and you’ll hear quite a different answer.

The main problem this tech faces is that it's ultimately not quite as precise as a mouse while requiring diehard console players to rethink the entire way they approach using their controllers. Even so, gyro aim is far more accurate than using a thumbstick and, arguably, a lot more immersive than a mouse.

All it requires is an open mind to learn a new skill and the patience to keep practicing it until perfected. Many pro console gamers have already switched to gyro aiming, so why not give it a shot?

Is gyro aiming on Xbox?

Unfortunately, no. Despite vocal fan requests, Microsoft has yet to implement a gyroscope or accelerometer into its controllers. Therefore, this function isn’t available on Xbox consoles yet.

Are gyro controls worth it?

Yes, absolutely. In our opinion, well-implemented gyroscopic controls take your controller experience to the next level, especially in first-person shooters and other games that require precise aiming.

How do you use gyro aiming on Steam?

You’ll have to use a compatible controller that has a built-in gyroscope and Steam’s Big Picture Mode to simulate mouse movement through your gyroscope. Then you’ll know the answer to, “What is gyro aiming like?” Check out our guide above for more information.

Does the PS5 controller have a gyroscope?

Yes, it does. That said, you’ll get more out of the PS5 DualSense controller if you connect it to a PC, as SONY rarely makes good use of the gyroscope in PlayStation games.