How to Connect an Xbox 360 Controller to a PC

The selection of games on PC is better than ever. With the rise of the indie scene and a multitude of digital storefronts selling games at discounts, there’s nothing stopping you from enjoying whatever game you want. Well, almost nothing. While a mouse and a keyboard combo is a time-tested setup, sooner or later, you’ll probably need a controller.

No matter how much you love playing games the traditional way, with a keyboard and a mouse, you’ll find a game that just feels off. Perhaps it has a bizarre keyboard setup that you can’t change, or it’s just designed to be played with a controller. If you check the forums, you’ll see that most gamers recommend getting an Xbox 360 controller since it’s the best-supported option for Windows-based PCs. No disagreement here, Xbox controllers are high-quality devices that provide great functionality with a majority of games. And if you’re playing a PC port of a console game, having an Xbox 360 controller is almost mandatory. So getting one is a no-brainer, but what about installing it?

We’ll cover how to connect a wired Xbox 360 controller to a PC and its wireless pc controller counterpart. Now, there’s a quick and expensive way and a cheap and complicated way. Fortunately for you, this guide will make it all simple and stress-free.

If you want a simple plug-and-play method, just get a wired Xbox 360 controller for a PC. While couch gaming with a wireless controller may sound tempting, installing a wired version is more straightforward and cheaper.

Of course, before you can play games with an Xbox 360 wired controller, you’ll need to install the Xbox 360 controller driver.

Start by plugging in the Xbox 360 usb controller for PC in one of the USB ports on your computer. All Xbox 360 controllers support USB ports 2.0 or higher, and every computer should have those.

As soon as you plug in the controller, Windows 10 will immediately search for and install appropriate drivers for the wired Xbox controller for a PC. A pop-up window will notify you that the driver is installed, and you’re good to go. Most games have calibration options to test if the buttons, trigger, or stick react correctly. Alternatively, you can also use the Game Controller app for calibration.

If Windows detects and installs the Xbox 360 driver correctly, your troubles end here. But if Windows does not see your Xbox 360 wired controller, there’s a simple workaround.

If you have an installation disc that you’ve got with a controller, insert it, and the Microsoft Accessories Setup will open up. Follow the installation instructions, and when it’s done, you’ll have your wired controller ready to go.

There’s a decent chance that your rig doesn’t have a disc drive as they’ve been going out of fashion. They’ve been replaced with high-capacity USB sticks and cloud backups. If you don’t have an installation disc or a CD drive, download the Xbox 360 controller driver for Windows 10 from Microsoft's website. In the Software & Drivers menu, select the Windows 7 version, either 32-bit or 64-bit, depending on your OS. Don’t worry, both will work on Windows 8 and Windows 10 computers. Download the program, activate it, and go through the installation process.

Once you’ve dealt with the drivers, it’s time to check if it’s working as it should. Click on the Start button and enter Run. Once the app is open, type in “joy.cpl” and press Enter. It will open up the Game Controllers app; select the controller and then click on Properties. Here, you will be able to test controller buttons, triggers, sticks, and touchpads.

By now, you should know how to connect an Xbox 360 controller to your PC without any trouble. However, wireless controllers have been known to be tricky to set up for a while. They might exhibit connectivity issues, or the computer might not recognize them. No matter the issue, the cause was probably in the controller packaging.

Microsoft officially sells wireless Xbox controllers for PC in a bundle with the receiver adapter. Getting this bundle is the priciest solution, but you’ll get everything you need with full software support and no hassle. Retail sites often sell knock-off receivers for $10–$20.

Anyone wondering how to connect an Xbox 360 controller to a PC without a receiver will be disappointed. The only way to do it is with a USB cable, which defeats the purpose of having a wireless controller. Microsoft wireless controllers operate on a 2.4Ghz communication protocol, and you’ll need a receiver that supports that. If you don’t have one, your controller can’t communicate with your PC.

If you get an official Microsoft bundle, you’ll get an official receiver, and the installation will go without hiccups. If you get a 3rd party receiver, you might run into some trouble. A rule of thumb is: The cheaper you go, the higher your chances of encountering problems during setup or gaming.

After we’ve settled any hardware dispute regarding the wireless controller, we can move on and explain how to connect a wireless Xbox 360 controller to a PC.

Insert the receiver into a USB slot. If you are using a 3rd party receiver, here is a tip that will save you a lot of hassle: plug these receivers in a back USB slot or a powered USB hub. Choose a spot where you won’t touch it. Because every time you pull out a 3rd party receiver and plug it back in, there’s a good chance you’ll have to go through the installation process again.

Once you put the receiver in, Windows should automatically install the necessary drivers. If that doesn’t happen, check if you have an installation disc and follow the steps outlined above. Make sure you’re using a proper RF adapter receiver; a Bluetooth dongle won’t do. If you want to use Bluetooth and were trying to find out how to connect an Xbox 360 controller to a PC that way, we’ll have to disappoint you again. You’ll need the proper equipment.

At the time of writing this article, Microsoft retired a large number of Xbox 360 accessories, including the Xbox 360 Wireless Gaming Receiver for Windows. Fortunately, the latest Windows updates have driver support for all official and most unofficial receivers. Still, there’s a chance Windows doesn’t recognize your 3rd party receiver. If that’s the case, here’s a workaround.

Press the Windows and X or right-click the Start button to open up the start menu. From the menu, select the Device Manager. Under Other Devices, you will see the Unknown Device item. 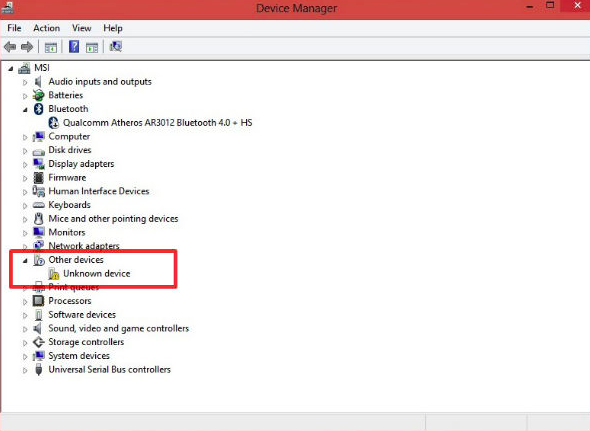 Right-click on it and select “Update Driver” to get the Xbox 360 driver for the receiver. From a new window, select the option “Browse my computer for drivers,” then select “Let me pick from the list of available drivers on my computer.“ 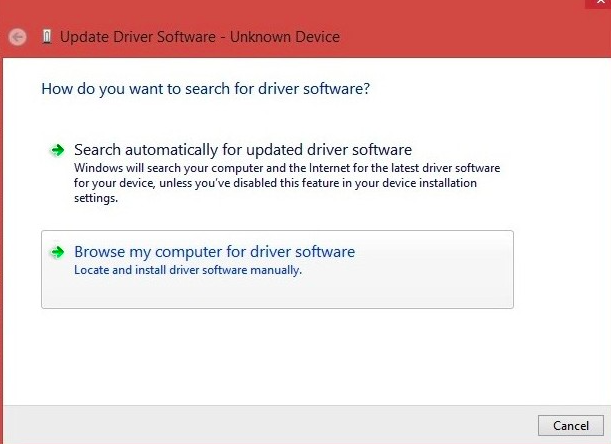 In the list with devices, go to the bottom of the list, where you’ll see the “Xbox 360 peripherals.” 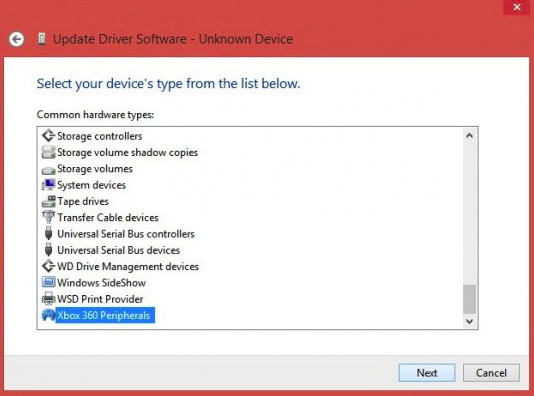 The “Select the device driver you want to install” window will open with a list of available drivers. Select the Xbox 360 Wireless Receiver for Windows. Click Next, select Yes, and Windows will install the missing driver. Alternatively, apps like Driver Booster will take care of the entire process, and you won’t have to worry if you got the right Xbox 360 drivers. 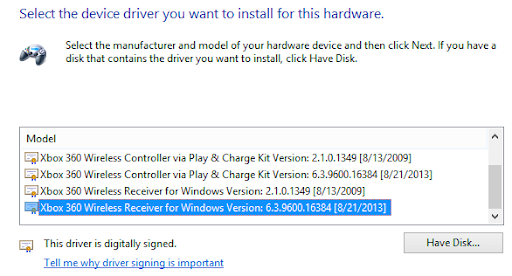 Finally, we need to sync the Xbox controller with the receiver. First, make sure the controller is powered up by pressing the Guide button. On the wireless controller, press and hold the button in the center until a green light activates. Then press the Connect button on your controller – it’s located on the front side, just above the battery. After a green ring rotates on the Xbox Guide button, it will indicate which controller it is by lighting up the appropriate quadrant. This is useful as you can connect up to four wireless controllers to a receiver. 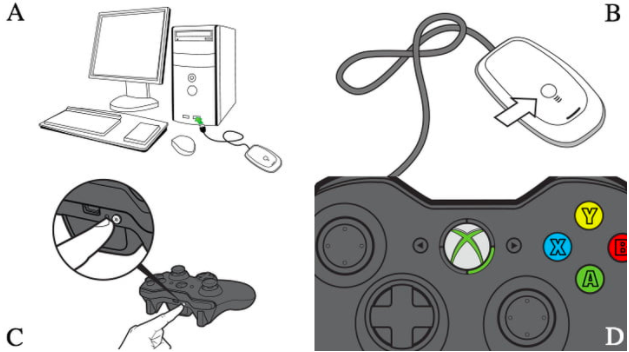 While you don’t have to get the official Xbox 360 controller drivers for the wireless version to function, it does enable a suite of useful features, like checking the battery status. Right now, these drivers are not available for download from Microsoft’s website. If Windows doesn’t detect the drivers automatically, you might have to do some digging online.

With the controller installed and configured, you are ready to step into gaming waters like a champ. While the official Xbox 360 driver support (including controllers) might be slowly coming to an end, almost every PC game supports these devices. Thanks to Microsoft’s continued presence on the market and its plans for the future of PC gaming, we can expect that Xbox 360 controllers will continue to work just fine.

Can you connect an Xbox 360 controller to a PC?

Yes, easily. If you have a wired controller, you just need to plug it into a 2.0 or better USB slot, and Windows will install needed drivers automatically. As we mentioned earlier, when explaining how to connect a wireless Xbox 360 controller to a PC, you need to plug in the xbox 360 wireless adapter receiver to install drivers, then connect the controller with a receiver.

Is the Xbox 360 controller Bluetooth?

Xbox 360 controllers don’t have Bluetooth support due to a unique RF interface.

How do I connect my Xbox 360 controller to my PC via Bluetooth?

Can you connect an Xbox 360 controller to a PC without a receiver?