How To Stream on Discord: Share Your Epic Gamer Moments With the World

Streaming video games is not as easy as it seems. You need a beefy PC with a fast CPU and powerful graphics card, a good gaming mic, a camera or two, not to mention a fast internet connection. It doesn’t always have to be that complicated, though - provided that you learn how to stream on Discord.

In this guide, we’ll cover all the basics of Discord, go over the terminology and various methods for streaming all kinds of apps through this popular gaming platform, including movies. Even if you prefer just hanging out with your friends and watching others stream, continue reading this article, as we’ll also discuss how to join other players’ streams from your computer or mobile device.

Let’s start with the basics of the platform and what it can and can’t do.

The platform’s streaming feature is called Screen Share. Originally, it was designed to just stream whatever’s on your screen to a private call on Discord. Renamed to Go Live, it has evolved over time and now allows you to pick a specific window or an app, and stream to voice channels on Discord servers to up to 50 people.

Discord doesn’t keep an archive of your streams - unlike Twitch, which even provides VODs when streaming mobile games. This makes it more of a handy tool for ongoing streams than a serious competitor to dedicated streaming platforms. You won’t be making a career out of Discord game streaming.

On the other hand, streaming is notably simplified - all it requires is pressing a button. There’s no need to set up scenes like in OBS. The app is even capable of detecting what game you’re currently playing, so other people in your channel will know what to expect before joining the stream.

As for the hardware requirements, you’ll want to make sure that your device can run the game at a stable framerate. You’ll also need at least 5 Mbps of upload speed for 720p streams, or twice as much for 1080p streams. A mic and a good streaming webcam are nice to have but not indispensable.

How To Stream on Discord

Finally, it’s time to fire up your very first stream and share your gaming exploits with your friends. Since the Discord app is available on both desktop and mobile, we’ll go through both methods of going live on this platform. One important thing to note is that you’ll be limited to 720p 30 frames per second streaming unless you subscribe to Discord Nitro. With that subscription, you can stream in any resolution and at 60 fps.

Discord, along with its Go Live feature, is available on Windows, Linux, and Mac. Here’s how to stream on Discord on your computer: 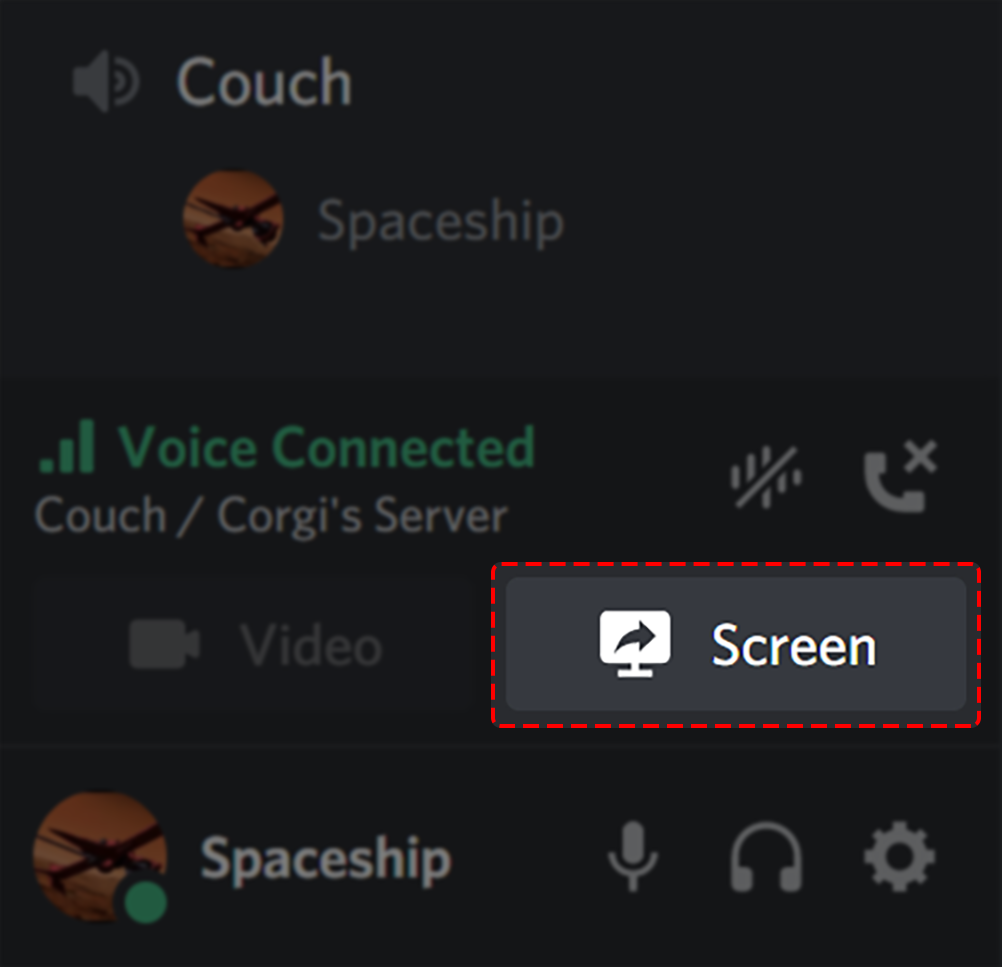 4. From the dialog box, select the app you’d like to stream and then click on Go Live.

During your stream, you can switch windows and video quality from the same section of the Discord window. This is also where you can end the Discord stream. Note that your audience won’t be able to hear in-game audio unless you’re streaming from a Windows 10 device. On Mac and Linux OS audio sharing is currently impossible due to some permissions locked on those systems.

Discord now allows mobile streaming, too, on both Android and iOS. While streaming works on phones with small screens, it’s recommended to get a smartphone with a larger screen and a bit more horsepower under the hood, unless you’re okay with your friends watching a choppy stream. Anyway, here’s how to screen share on Discord from a smartphone:

The mobile stream will start immediately, meaning that your channel will see everything you see on your phone. It’s advisable to close any important apps before streaming and put your phone in the “Do not disturb” mode, so viewers don’t get to see any notifications.

How To Stream Games on Discord

Since this is an app for gamers, it’s natural to expect some streamlining when it comes to streaming video games. Discord can actually detect when you’re playing a game, not just to let your friends know but also to stream it. When you’re in-game, Discord will display the game title in the Go Live panel. From there, just click on the Stream icon to start the stream and choose the voice channel to connect to. 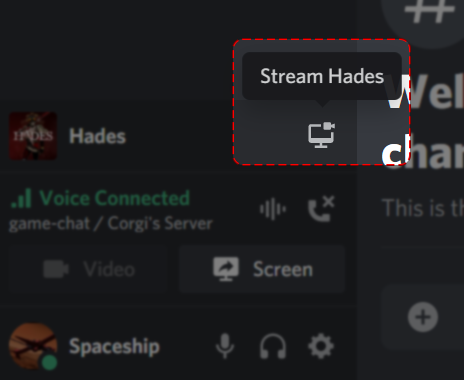 Sometimes, Discord won’t be able to detect the game you’re playing, and the button won’t be present. Here’s how to stream on Discord in case that happens: Try manually adding the game to the app’s detection engine by going to User Settings, and then, under Game Activity, locate and click on “Add it!” In most cases, that’ll fix the problem. 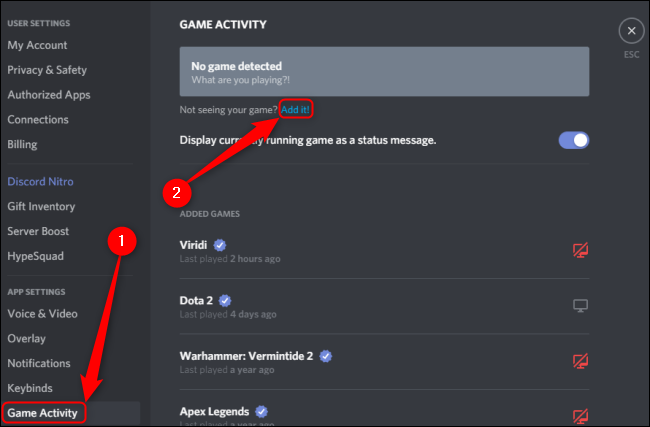 Unfortunately, there are still games that can’t be streamed even when using this method. Your only option in such cases is to use screen share and/or set the game to run in windowed mode. It’s highly probable that Discord won’t be able to capture game audio, but at least you’ll get the chance to show off your skills to your friends.

How To Stream From Console to Discord

While streaming PC games on Discord is as straightforward as it can get, console streaming is a bit more complicated, at least for now. Consoles can’t send footage directly to Discord. Instead, you’ll need to stream to another service first and then capture that window using the screen share feature.

Arguably the simplest consoles for streaming are the PS5 and PS4. That is thanks to Remote Play, a free official app for Windows and Mac OS that lets you play your PlayStation games on a PC. This app’s window can then be captured by the Discord screen sharing tool and the footage sent to your channel. You’ll need to use your PlayStation controller on the PC for this to work. Note that the output resolution will be limited to 720p on the PS4 Slim or 1080p on the PS4 Pro and PS5. Input delay is almost nonexistent, but you might want to turn the “performance” rendering off if you’re playing on a last-gen console, as that can lead to blurry videos.

Discord might be available natively on Microsoft’s consoles, but even on the Xbox Series X you can’t use it for streaming or cross-platform voice chat. While streaming through Discord directly isn’t possible, you can install and launch Twitch on your Xbox and start a stream through that app. Then, open the browser on your computer and use the Go Live feature to capture the browser window. It’s not very elegant, but it works, and that’s all that matters.

Nintendo’s hybrid console is the trickiest one to connect to Discord, as it requires both a monetary expense and a separate piece of hardware. You’ll need a capture card for this. Send the Nintendo Switch’s HDMI output to the card and the output to your PC via USB. Then, start a Discord live stream by screen sharing the capture card’s accompanying app. While this is the most expensive solution, that costs almost as much as an entry-level RTX graphics card, it also provides the best image quality.

So far, we’ve talked about streaming on Discord, but let’s now take a look at how you can participate in other people’s streams as an audience member.

First of all, you need to know whether there’s an ongoing stream on any of your servers if you’re not joining a private voice chat session. Here’s how to watch a stream on Discord once you’ve located a server where someone’s streaming: Hop on that server and look at voice channels. If a member has a red LIVE mark next to their name, that’s an indicator that they’re streaming something. Just click on their name, and you’ll join both that voice channel and the stream.

Once the stream buffers, you’ll see a few buttons for controlling your view. You can either enlarge the window by switching to Focus view, switch to full-screen mode, or click the pop-out button and open a separate window.

How can you stream on Discord with sound?

If you are wondering how to stream on Discord with sound, you should know that sound capture currently only works on Windows and mobile clients. Discord on Mac and Linux is unable to share any application audio due to some restrictions set by those operating systems, while on Windows 10, audio is automatically captured.

Can you get Discord on PC?

You can download Discord for Windows on the official website and use the app without firing up your web browser. The stand-alone app is free and available for Windows, Linux, and Mac operating systems. Your account and servers will be available wherever you log into Discord.

Can you stream Netflix on Discord?

Yes, any kind of content you can play on your computer can be streamed through Discord. You’ll need to run Netflix in a browser on a Windows PC and have Discord capture that window.

What is Discord Nitro?

Discord Nitro is a premium service available for all Discord members. It works on a monthly subscription model and unlocks many features, including 1080p 60 fps streaming and animated avatars. It also lets you use emojis from any server you’re a member of.

Is Discord safe for kids?

Like any chat app, Discord poses a certain level of risk to children. If you’re worried about your kids’ online safety, consider not showing them how to stream on Discord, but instead make sure they’re joining kid-safe servers and are not getting harassed by internet trolls.

How To Stream Mobile Games on Twitch
Read more