Mobile gaming is great, but it’s still far from the graphics and gameplay of console games. Wouldn’t it be amazing if you could somehow play all of your Xbox One and Xbox Series X games wherever you go, on your phone, without having to carry the console? Well, now you can, thanks to the magic of streaming.

Figuring out how to play Xbox games on your phone is a little bit tricky as it’s not the most straightforward process. You need to set up your console, download certain apps on your phone, and even hook up a controller. Don’t worry, though: we’ve gathered all the information in one place.  So, strap in, and let’s start learning about the basics of console game streaming.

There are two ways of playing Xbox games on the phone - via wireless streaming from your own console or streaming directly through the cloud. The former method is the most common one, and it’s called Xbox remote play. Unlike cloud streaming, it’s available for Xbox gamers anywhere in the world and doesn’t require any subscriptions or extra purchases to work. However, there is a bit of a setup involved, and even then, it can’t run out-of-the-box on your phone.

Setting up Your Console

Before we continue explaining how to play Xbox games on your phone, let’s first set up your console to enable streaming capabilities in the first place. The method is the same for both current- and last-gen Xbox consoles, as they share the same interface.

With your Xbox turned on, press the Xbox button on the controller and head to the Profile & System tab. Select Settings and press A. 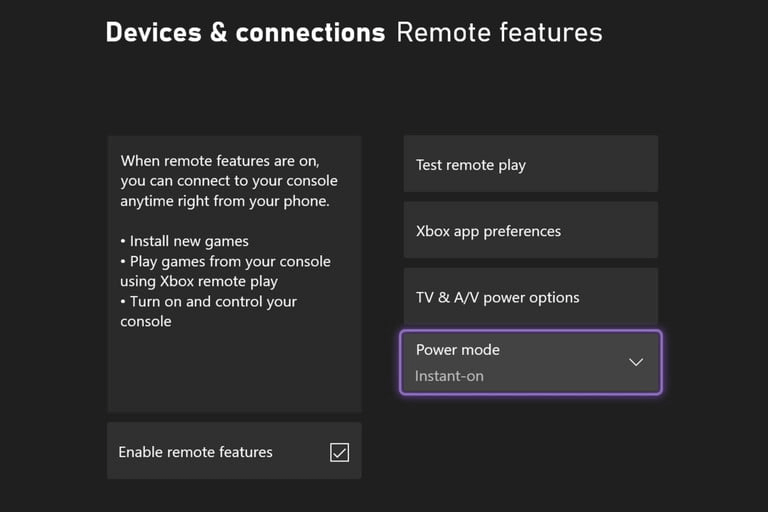 In the Settings menu, go to Devices & connections and select Remote features. Ensure that “Enable remote features” is checked and then set the Power mode to “instant-on.” This will let you remote control the Xbox console (including performing remote game installations) while also making it boot faster.

Setting up Your Phone

Moving on to our phone, there are two things we’re going to set up - the controller and the official Xbox app. Again, you can use any gamepad that’s certified for your smartphone’s OS, as long as it has all the buttons you need for the games. Of course, it would be best if you could carry your Xbox controller with you, either the Xbox One or the newer Xbox X/S Series gamepad.

First, you’ll need to pair the controller with your phone. We’ll explain how to play Xbox games on your phone with an official Xbox controller, but the method is similar for all Bluetooth controllers.

Obviously, you’ll need to turn on the Bluetooth connection on your phone. Then, open the settings menu and find the option called Connected Devices or Device Connectivity (depends on phone manufacturer). Press and the pairing button on your Xbox controller. It’s the little button next to the left bumper until the Xbox logo starts blinking. Then, on the phone, tap on “Pair a new device” or on the controller’s name in the list of discovered devices. Confirm the connection if required, and the Xbox logo will stop blinking, signifying that the controller is now paired to your phone.

To stream Xbox to your phone, you’ll also need an app. Go to Google Play Store or App Store, find the Xbox app and download it. Once it’s installed, launch the app and log in to your Microsoft/Xbox account. It has to be the same account you use on the console.

Once everything’s set up, you can finally start playing some games. In the Xbox app, tap on the library icon, then Consoles, and select “Remote play on this device” to connect to the console. You can also tap on the console icon in the top right corner of the main screen. 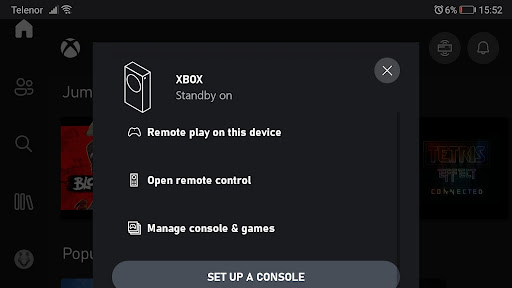 How to Play Xbox Games on a Phone Through Cloud

But, what if you’d rather play games without downloading them? Furthermore, what if you don’t even own an Xbox console? You can still play games through Xbox cloud gaming. The service, formerly called xCloud, will let you instantly launch any supported Xbox game. Microsoft’s servers run the game in the background and then send the feed to you via streaming protocol, so you’ll feel like you are playing on the top graphics card without the need to actually get one.

For this, you’ll need two things -  a fast Internet connection and an Xbox Game Pass Ultimate subscription. Game Pass has become a must-have for gamers, as it not only offers Xbox game streaming but also grants access to hundreds of Xbox and PC games to download. There are also perks in multiplayer games and sometimes even free subscriptions for other popular services. It costs $15 a month, but you don’t need a console to subscribe.

To start playing via xCloud, first, you need to download and install the Xbox Game Pass app. Then, launch the app and sign in to the Microsoft account you have activated the subscription on.

The app will list a massive collection of games, but only some of them can be streamed. To play Xbox games on a mobile device, tap on the Cloud button in the top menu. Find the game you’d like to play, tap on the green Play button, wait for the stream to start, and off you go.

Of course, a wireless controller is still needed to play these games, but some of them can be played via touch controls. Those games are marked with the icon and can also be found in the “Play with touch” sub-menu.

Alternatively, you can visit Xbox.com/play in your browser and launch streaming through that page.

Now that you know how to play Xbox video games on a phone, here are a few things to keep in mind before you dive into the vast catalog of Game Pass titles.

First of all, cloud streaming is still not available worldwide. Unlike consoles and even Game Pass, Microsoft is yet to open up streaming to a broader audience. Visit the list of currently supported countries to check whether cloud streaming is available in your region or the country you’re planning to travel to. You may need to get a good VPN for your phone if the service isn’t available where you live.

It should go without saying, but when you stream Xbox games on the phone, you can quickly spend your entire monthly mobile plan. Unlike Netflix, the stream both receives and sends the data (your inputs and game video) at a high refresh rate.

Lastly, the platform is still in beta, according to Microsoft. There are still some unironed kinks here and there, so you may run it some stuttering, lose your connection, or the app can even crash. Microsoft is constantly improving the app, so all the problems we ran into may very well be gone by the time your read this. In any case, it’s a great way to play Xbox games remotely, especially since you don’t even need to own any dedicated gaming hardware.

How can I play Xbox games on my phone without the console?

You’ll need an active Xbox Game Pass Ultimate subscription, a Bluetooth controller, and the official Game Pass app. Pair the controller with your phone, launch the app, and log into your Microsoft account that was used to activate the Ultimate subscription. Then, choose the Cloud from the main menu, and you can launch the games directly through the app. It all runs through cloud streaming, meaning that you don’t need a console, and there is no need to download the games themselves.

How can I play Xbox games on a smartphone?

Microsoft offers two ways of playing on the phone - either by using the official app to remote connect to the console or via Game Pass through cloud streaming. In both cases, you’ll need a Bluetooth controller paired with your smartphone.

How do you play on the Xbox app?

The official Xbox app is used for remotely controlling the Xbox console. Once pair to your console, the app can be used with touch controls or a Bluetooth controller over a WiFi or cellular connection. The games are streamed directly from the paired console.

How do you play Xbox games on the iPhone app?

Playing games on an iPhone works the same way as the methods we covered in our how to play Xbox games on the phone guide. You need to install an official Xbox app, pair a wireless controller, and then just connect to your Xbox via the app.

Best PC Controller Out There in 2022: Lead the Charge
Read more