How To Cancel Xbox Game Pass

Microsoft’s Game Pass is one heck of a deal. It’s often called “the best deal in gaming” by many of its 23 million subscribers worldwide. It’s a service that has become pretty much mandatory for many gamers, right alongside Steam and Discord. But, like any other membership, you might want to take a break from time to time.

If you’re wondering how to cancel an Xbox Game Pass subscription, you’ve come to the right place.

In this guide, we’ll cover several methods for cancelling this subscription, some of which do not even require user input at all. We will also discuss all of the benefits and special perks that a Game Pass membership provides. But, first, we need to answer a simple but essential question.

What Is Xbox Game Pass?

Launched in June 2017, Xbox Game Pass was a brand new service for Xbox users that let them gain access to an instant game library for a small monthly subscription. It was also a way for Microsoft to one-up Sony since, at the time, the PlayStation 4 was heavily beating the Xbox One in sales. It was an immediate success that had very few people wondering how to cancel Xbox Game Pass at the time.

The Game Pass library kept growing over the years, with Microsoft recently announcing that all of the first-party games for Xbox Series consoles will be available from Day 1 on this service. Many publishers jumped on the hype train, providing their games to Game Pass subscribers on launch day.

These days, many people consider the service a must-have for any gamer, sort of like Netflix for games: you just pick what you want to play, and it starts installing right away. If you’re going with Xbox Series X or S in this console generation, it’s pretty much a must-have subscription that can save you a whole lot of money in the long run. At least if you don’t cancel Microsoft’s Game Pass before giving all the new AAA titles on it a go.

The Ultimate pass combines the previous two into one and adds the Xbox Live Gold subscription plus some bonus features and benefits. Pricing-wise, it’s on par with Netflix. The basic subscription (either for the console or PC) costs $9.99 a month, while the Ultimate will set you back $14.99 a month.

New subscribers pay just $1 during their first month of the subscription and, if they already have an active Xbox Live subscription, Game Pass Ultimate will upgrade their existing subscription.

Before we explain how to cancel an Xbox Game Pass subscription, let’s first talk a little about the features of this service. We’ll focus on Game Pass Ultimate since it’s the most feature-rich option and is available on both Xbox and PC.

Just like Netflix, Game Pass instantly unlocks access to hundreds of titles the moment you subscribe. Specifically, over 350 games on the console Game Pass and 250+ games on PC. Similarities to Netflix don’t end there. As with the popular TV streaming service, the Game Pass library is a rotating one, so Microsoft adds and removes some games each month.

It’s a good idea to check the official Xbox blog before looking for information on how to cancel your Xbox Game Pass Ultimate. Something interesting might be coming up soon, and you don’t want to miss it.

A recent addition to the Game Pass service, EA Play provides access to nearly 100 additional games from the publisher Electronic Arts and its partners. The list includes popular franchises like FIFA, Need for Speed, Mass Effect, and Madden. On top of this big addition to your game collection, you’ll also get to play trial versions of the latest games from EA and get many perks in its games.

Also, you don’t have to worry about cancelling this membership. Being tied to Game Pass, it automatically ends when you cancel your Xbox subscription.

Although still in beta, former Project xCloud is already a great way to play your Xbox games on the go. It works exactly like PlayStation Now does. In other words, it’s a streaming service, so you need an internet connection and an Android device to play, but there is no need to download any of the games.

You can even hook up your Xbox controller, one of the best gamepads around, and play games anywhere from your phone or tablet, just like you would on your console at home.

As we’ve previously mentioned, the Ultimate subscription includes Xbox Live Gold. This means that you can play all of your multiplayer games online. At least until you turn off Game Pass renewal and let it expire, that is.

Ever since the original Xbox, the Gold subscription has been a mandatory purchase for gamers that wanted to take their games online. That’s why it’s such a good deal to grab the Game Pass Ultimate and get everything in one affordable bundle.

Since the Game Pass Ultimate subscription includes Xbox Live Gold, there is another great incentive to keep subscribed - free games. Every month, Microsoft gives out four games to its subscribers through the Games With Gold program.

Unlike the Game Pass library with its rotating selection, these games are for keeps, but you have a limited time frame to claim them. Do note that cancelling Game Pass will limit your access to these games, so while they will always be in your library, you won’t be able to play them unless subscribed.

The benefits of extending a Game Pass Ultimate subscription go beyond having access to its game library. As a subscriber, each month, you’ll be able to claim additional content for various games, including exclusive skins, bonus exp, and more. Xbox often joins forces with other services, like Disney+ or Spotify, and together they give out free subscriptions for GP Ultimate members.

If you use Microsoft Rewards, you can also earn points through Xbox just by playing the latest Game Pass titles. Lastly, if you purchase digital games, you’ll find many exclusive discounts and special offers.

What Happens When You Cancel Xbox Game Pass Membership?

Xbox Game Pass uses a standard format of monthly memberships and automated payments. Just like with cancelling PlayStation Plus, you don’t immediately lose your benefits when you cancel this subscription. Instead, you’ll have access to everything the service provides until its expiration date. This works with the $1 trial month, too.

You might not even need to cancel Game Pass membership by yourself, though. Microsoft offers prepaid cards for all Game Pass variants. These come with one, three, six, or 12 months of access so, when that time expires, so will your subscription.

How To Cancel Xbox Game Pass on Console

It’s very easy to check the status of any of your subscriptions and cancel them through your Xbox console. Whether you’ve got an Xbox One or one of the current-gen consoles, the process is exactly the same. 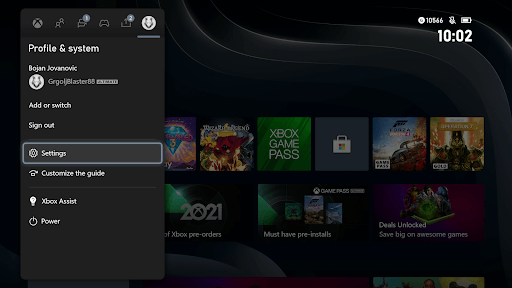 To start, press the Xbox guide button on your controller and from the menu, switch to the Profile tab. Then, select Settings and press A. 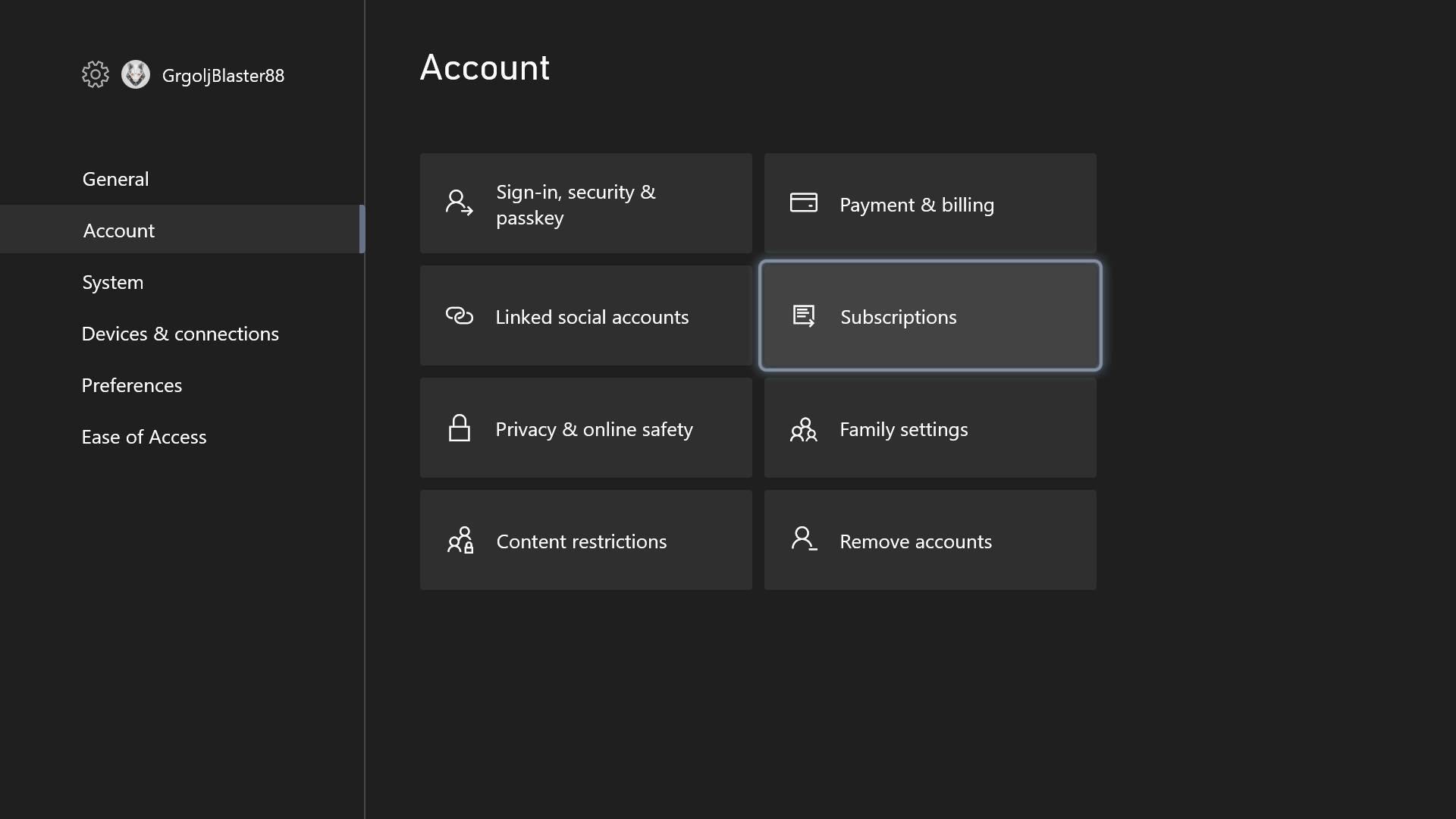 In the Settings menu, navigate to Accounts and select subscriptions. Here you’ll see when your Game Pass is set to renew automatically. Press A, and then you’ll get the option to cancel further billing. 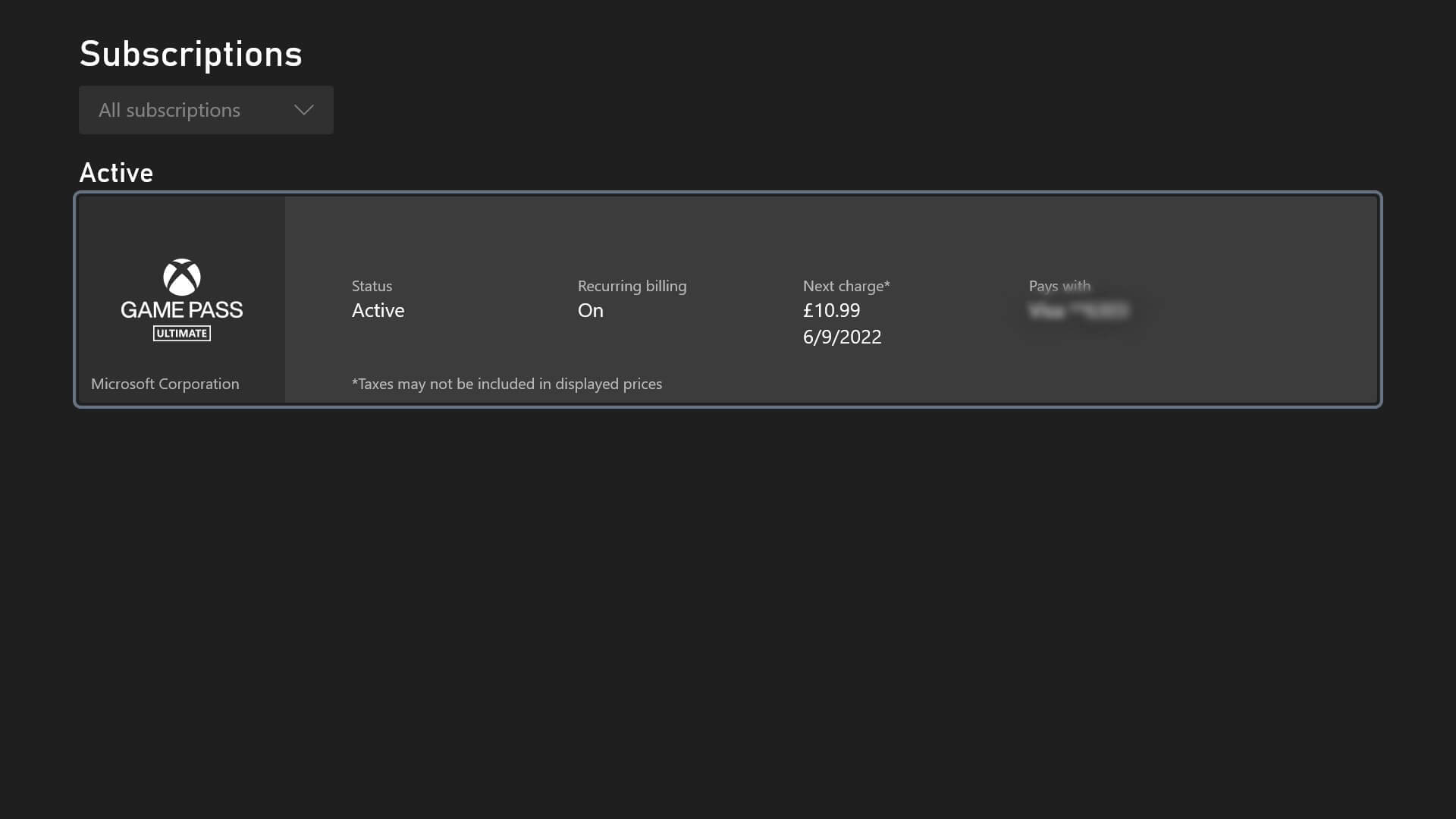 How To Cancel Xbox Game Pass on PC

The process is slightly different and longer on a personal computer, as it requires navigating to the Microsoft Account website instead of simply using the Xbox Game Pass app. Once you’re on the website, log into your account using the same credentials you use on your console. Then, from the top menu, click on Services & Subscriptions.

Then, click on the Cancel link on the right and choose whether you want to stop renewals or want a refund. The latter option doesn’t offer full refunds if this isn’t your first month with the service, but instead partial ones. Also, if you choose this option, your membership will end immediately.

Confirm your selection. You’ll get a confirmation on the website and an email with all the details regarding your cancellation.

How To Cancel Game Pass on Mobile

Since there are apps for Xbox and its Game Pass service, it’s only natural that you should be able to manage your subscriptions through them, right? Well, Microsoft hasn’t enabled that feature yet, so you’ll still need to go to the website to cancel the subscription if you’re away from your Xbox console.

How do I turn off renewal on Game Pass?

Using either your console, PC, or smartphone, you need to access your account and view your current subscriptions. From there, you’ll need to hit Cancel next to the Game Pass sub, turning the automatic renewal off.

Can I cancel my Xbox Game Pass subscription after one month?

Yes, you can cancel the subscription at any time, which turns the auto-renewal off but won’t revoke your access to the games immediately. Once you cancel the subscription, the system will notify you of the date when your membership expires. Just be sure to cancel it at least one day before your one month trial is set to renew automatically to avoid any unexpected charges.

How do I cancel a subscription on the Xbox app?

This is not possible at the moment. You either need to go to Microsoft’s website or cancel it via your Xbox console.

How do I cancel a recurring subscription on Xbox Game Pass?

If you want to know how to cancel Xbox Game Pass or just check your next billing date, all you have to do is visit the Accounts section in the Settings menu of your Xbox console. All your subscriptions will be listed there, alongside their upcoming billing dates and the option to cancel further billing.

What Is Cloud Gaming: A Definitive Guide
Read more