What Is Radeon Chill? A Small Guide to AMD’s Coolest Feature

AMD is back in the game. After years of playing catch-up with NVIDIA in the high-end GPU market, the new RDNA 2 architecture brought the company back in contention. Other than a revolutionary new chip architecture, a key part of AMD’s success in recent years involves a huge overhaul of their GPU software, Adrenalin. Among the many great features and performance optimizations, one of the more notable ones is Radeon Chill. So, what is Radeon Chill? How do you turn it on, and what’s the best way to make use of it? Read on to find out.

AMD’s Chill is a power-saving tool designed to automatically reduce redundant FPS in games. It enables the graphics card to run cooler and helps you save on electricity bills while having no visible downsides to your gaming experience.

It accomplishes this by dynamically altering framerates based on character and camera movements in games. As they get reduced, so does the framerate, lowering overall GPU usage and power consumption in the process. This typically has the greatest effect on the map and inventory screens or when you alt-tab out of the games that do not automatically suspend rendering processes when not active.

AMD Radeon settings for Chill allow for fine-tuning both the minimum and maximum FPS. As such, the tool easily accommodates users who are uncomfortable with dipping too low or are playing twitch-based shooters where every bit of FPS. It also works on a large variety of DirectX® 9, DirectX® 10, DirectX® 11, and DirectX® 12 and Vulkan® games.

How to Use Radeon Chill

So, now that we know what it is, how do you actually use Radeon Chill? First off, we need to enable the option and set up a hotkey. By default, this is F11, but it can be changed to anything you like within the settings in the Radeon Adrenalin software.

In the newer versions of AMD’s settings, you’ll have to go into the Graphics tab first. From there, the software itself will give you a shortcut to the settings you need. The visuals below will help you figure out how to turn on Radeon Chill. 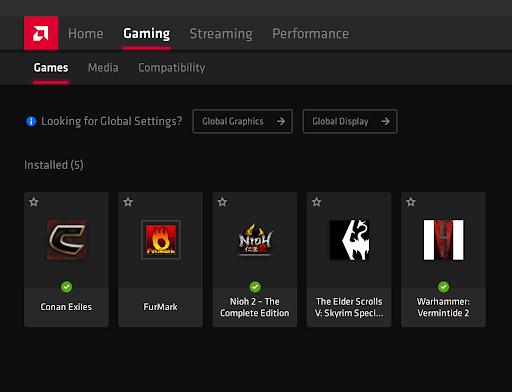 Once you’ve clicked on the Global Graphics tab, you should see the following screen: 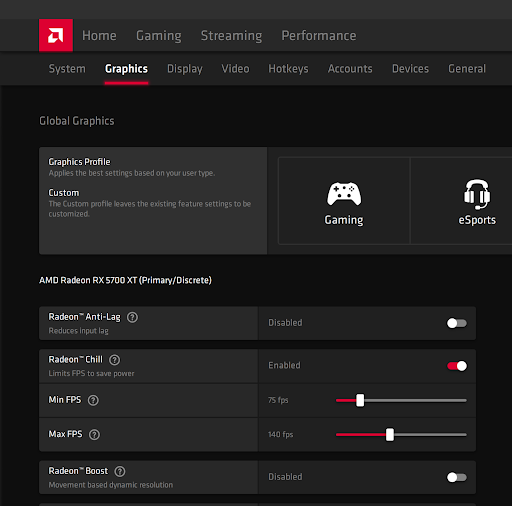 From here, you can turn on settings such as Radeon Chill, Boost, Anti-Lag, Radeon image sharpening. Simply flip the button and then select your preferred min FPS and max FPS counts. The former setting targets the FPS when idle (i.e., your character is standing still or you are in the inventory, map, or settings menus). The latter is the maximum FPS you want to get during your gaming sessions.

If you’re wondering what is the Radeon Chill function able to provide other than “nerfing” your FPS, the answer is simple; it cuts your electricity bill and delivers a longer-lasting graphics card. Depending on the game and how often you’re idle, not having both your CPU and GPU working at 100% all the time will preserve them while making your entire rig a lot more energy-efficient.

Now that you’ve set AMD’s Chill setting globally, it’s worth mentioning that this functionality can be custom-tailored to each game individually. This is done through the application profiles by using Radeon Overlay.  Go directly into your game’s profile and turn Radeon Chill on or off from there. You can also use this menu to fine-tune the minimum and maximum FPS counts for each game separately.

Setting up the Radeon Chill Hotkey

Chill’s global on/off switch is the F11 key, but you can customize that to anything you desire within the Hotkeys menu. To get there, follow the same steps that we’ve described in the section about turning Chill mode on.  This time, instead of going into the Graphics settings, go into the Hotkeys tab. From there, you can set up hotkeys for a variety of different functions within the Radeon software, including Chill. Obviously, the hotkey is a global setting, so make sure to set it to a key that won’t overlap with other functions in any of your games. 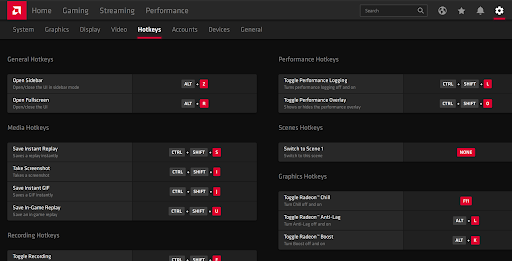 Getting the most out of AMD’s Radeon Chill

Over several iterations of Adrenalin software, AMD has fine-tuned the Chill functionality, allowing it to automatically detect your monitor and GPU and setting up the best default settings out of the box. To really take advantage of the system, however, you’ll want to have a Freesync-capable display. Chill max and Chill min FPS settings will automatically be set to your monitor’s max refresh rate and half of that, respectively.

The best thing about having a Freesync-capable monitor is that it automatically adjusts FPS transitions, making those jumps from your idle Chill FPS to the one during intense action way smoother and less jarring on the eyes.

Switching AMD’s Chill on or off while Freesync is turned on allows you to benefit from power savings at basically no downside whatsoever, even if you set up extreme differences between the minimum and maximum FPS counts in your games.

Another thing to consider is the type of games you play. Action games and FPS shooters will want even the minimum FPS setting at near the maximum of what you’d want during intense action sequences. 2D strategy and click-heavy card games such as Hearthstone are a different story. They will typically have huge FPS if you don’t know how to enable Radeon Chill due to the relatively low GPU requirements. Ironically, these games can also be played at much lower framerates without noticing much of a difference in the gameplay. It’s best to experiment by yourself and set up profiles for each game individually.

Finally, while it may not make a huge difference, getting a good HDD or SSD drive will also lead to less stuttering and a smoother gaming experience.

How to Move Steam Games to Another Drive
Read more