It’s Friday night, the perfect time to unwind and go partying with friends. You gather with your mates at a club and dance the night away until closing time. But nobody’s ready to go home yet, but thankfully one of your legendary friends is having a party at his house and invites everyone over. It’s the same people, the same music, and the same atmosphere as the club.

Why are we talking about party-hopping? Because it’s a good analogy for learning how to raid on Twitch feels.

Twitch is the most popular game streaming platform on the internet, and it recently introduced a new way to boost streamers’ visibility called the raid. As a Twitch streamer, you can use a raid to move your audience to another streamer’s channel, where they can actively participate.

It’s a system designed for streamers big and small to promote their friends, help build each other’s popularity, and increase the number of visits for other streamers. Indeed, Twitch created raids to help both smaller streamers and channel viewers. But as with any other system, it could potentially be open to manipulation.

In this article, we’ll delve into everything you need to know about Twitch raiding, including how to run a raid and how to block raids. We’ll also explore the philosophy and look into how you can engage in raids properly to make it a mutually positive experience that helps build your network of connections.

Send in the Raid Brigade

When a Twitch streamer ends their broadcast, they have two options. They either call it a day and the viewers dissipate, or they start a raid to another channel and take their viewers there. The viewers will now be able to participate in the chat on the other channel.

To start raiding on Twitch, as a streamer, inform your viewers that you’ll begin the raid shortly and let them know what message they should paste when they land on the other channel. You can conduct a raid or view raids on smartphones, both Android and iPhones - preferably the best smartphone with a removable battery that will handle hours of streaming. 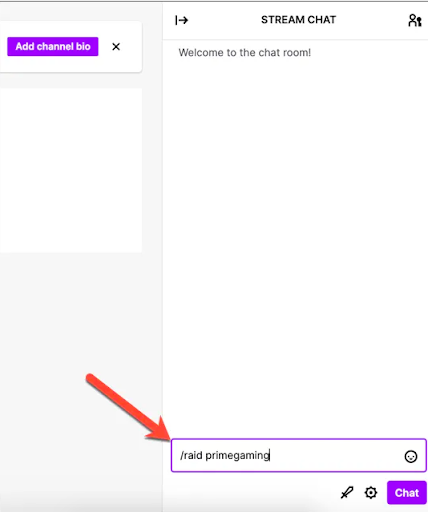 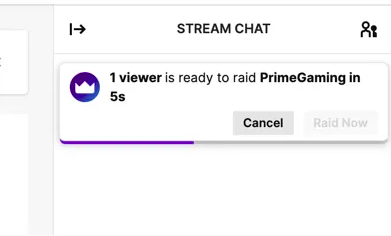 Another method for starting a raid is to click on your profile icon in the upper-right corner and select the “Creator Dashboard.” In the same corner, select the option “Raid Channel,” then either type in the name of the channel or select it from the list of channels you follow.

When you think about how to raid on Twitch, the community and streamers assume that you’ll be doing it in good faith. The primary purpose of conducting a raid is to promote streamers and their channels, helping them get more views with no strings attached. However, these actions are usually repaid with kindness; the streamers you’ve previously raided might later raid your channel and potentially bring in new viewers. It usually works well, as the community wants to enjoy the best games on the current gaming market.

However, raids can be used for harmful spamming. Some streamers don’t take too kindly to pranks and messages from raiding viewers, or they might not like the idea of raiding in general. That’s why the streaming organization thought about how to end a raid on Twitch, offering protection from any harassment that might occur. With the following methods, you can restrict raids to friends, stop non-followers from communicating, or report malicious raids.

To activate a followers-only chat that will effectively stop a raid and comments from “bad actors” coming your way: 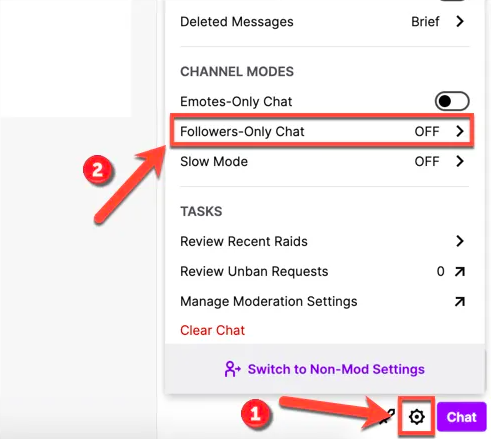 You can report a raid you consider to be executed in bad faith after it’s done. You can also block the channel that raided you to stop them doing so again in the future. The start of this protection method is identical to the one for activating a followers-only chat. 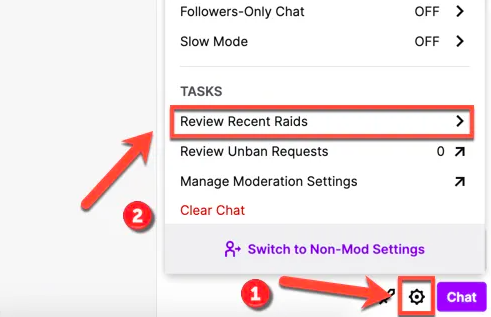 Raiding Amongst Friends Only

You have the last word in choosing who can raid your channel. 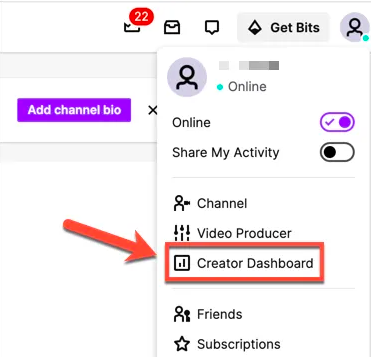 Now you know how to start a raid or stop future incoming raids on Twitch. But how can you conduct a raid in the best manner possible? How will you leave a positive impact on the Twitch community, which might eventually reward you with more viewers?

The simple answer is to know your place, know your audience, and communicate everything. Twitch is a great streaming and social media network if you know how to win the community’s heart, Twitch statistics confirm.

The long answer starts with recognizing the size and popularity of your channel. You should be considering how to raid someone on Twitch who’s on your level. If you’re a small channel, there’s little sense in raiding a big-name streamer. The audience you’ll bring will barely make a dent or leave an impression on the large streamer or their moderators. The chances are even lower that you’ll get raided back by their large viewers’ base.

On the other hand, raiding smaller channels than yours may leave them overpowered by the sudden attention. While they’ll surely notice you, they may not be able to return the favor in any meaningful way.

We’ve already mentioned how to choose who to raid on Twitch and how to protect yourself from unwanted raids by setting up a followers-only chat. You can use the same principle to check the history of raids and find a raiding channel close to your size. From the “Review Recent Raids” list, find a channel with similar games that you play and a similar viewer base.

This leads us to the next step: knowing your audience. Your viewers watch a raid and your standard content because of the type of games you play and the skill level you bring to the spotlight. They also watch you and chat with you because you provide entertainment. The best channel to Twitch raid is one that shares similar games played in a similar style, along with a streamer who is equally entertaining. Talk with your viewers and get their input on who you should raid.

Proper communication channels are the last and most important step in creating a lasting positive experience for both raid channels. When you find a channel to raid, contact them first and see if they’d be willing to participate. When the raid starts, stay in the chat for the first couple of minutes to establish some common gaming topics.

Another consideration for nailing Twitch raids right now is that raided streamers should make new viewers feel welcomed and entertained. Introduce yourself briefly, then talk to the raiding streamer about what type of games and content they create. Talk to raiding viewers to see why they follow that streamer. If all goes well, contact the streamer and ask if they’d be willing to repay the favor for you and your viewers.

Contribution to the Community

You can always select opt out from raid participation if it doesn’t suit you. But in the long run, you’ll learn how to do a raid on Twitch with positive results for you and your audience, as well as for the participating channel and their viewers. It will help you to strengthen existing connections and create new ones within the Twitch community. And that will improve the visibility of your channel, which ultimately leads to more viewers.

How to host on Twitch?

Both raiders and hosts have the same goal of promoting the hosted channel. The difference between Twitch raid vs host is that the hosted channel cannot see the chat from the raiding viewers, but these viewers count in the hosted channels’ metrics. If you’re wondering how to host someone on Twitch, enter /host in the chat window followed by the channel’s name.

Do you have to be affiliate to raid?

No. As we pointed out in our “How to raid on Twitch” article, any streamer on Twitch can raid other channels, not just streamers from the affiliate program.

How to get raided on Twitch?

Run a raid of your own on another channel, and the raided channel may return the favor by raiding your channel back.

How to stream on Twitch?

Download and install the Twitch app if you’re using a smartphone, or log in if you’re using a PC. Create an account and allow two-factor authentication. Choose the right streaming software, or select OBS studio for free to stream the raid on Twitch.

What is ASUS MultiFrame?
Read more

AT&T vs. Verizon: Which Carrier To Choose in 2022?
Read more
Leave your comment