By Jovan
Share
Updated: October 11,2022
Some of our stories include affiliate links. If you buy something through one of these links, we may earn an affiliate commission.
Affiliate Disclosure

The Hong Kong-based AOMEI Technology is a leading brand in the field of data protection and backup tools. In a little over a decade, the company helped millions of users back up, restore, and clone their systems, saving untold amounts of important and sensitive data that could have been lost in the aftermath of unforeseen system crashes.

In our review of AOMEI Backupper, we delve deeper into this app, its various tools for backing up and restoring files, as well as its desktop and mobile versions. We’ll also take a look at the free version and compare it to the paid version, going over all the pricing plans available for this software.

Like in all of our reviews, we’ll test the app to determine the quality of the user experience and examine how it fares against the competition. But first, we need to take a look at all the features and tools that the AOMEI Backupper software has in store.

AOMEI is focused on securing user data, and the AOMEI Backupper is more than just simple backup software. The key selling points are the manner in which the app works and all the different ways it allows you to create a PC backup. 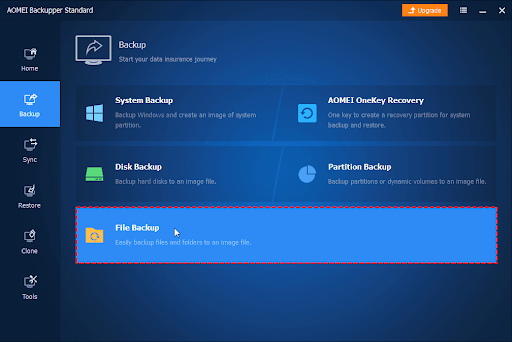 The main function of AOMEI Backupper is backing up and restoring data, and the app employs multiple backup and recovery methods, with support for both PCs and smartphones. All backups can then be sent to another HDD or SSD, USB drive, or NAS, shared over a network, or uploaded to cloud storage.

The next important feature of this backup software is the restoration of the backed-up files. The AOMEI Backupper offers you the option to restore your data via a previous backup or an image file. This includes partition restoration, which we mentioned earlier in our AOMEI Backupper Standard review.

Depending on whether you’re restoring to the same Windows PC or a new machine, this process can override partition settings and files. That’s why it’s best to move any existing important files to another drive, just in case.

Obviously, when running a restore operation from a bootable drive, you won’t need to run AOMEI Backupper manually, as the backup restoration process is automated by the autorun file. The app also allows for selective file restoration and drive cloning, which is the best option for a full backup of your system. With ransomware attacks on the rise, this is a good tool to have.

Positive online AOMEI Backupper reviews only serve to confirm our assessment of the efficiency of the app’s extra tools for managing different backups. Each file backup you create is marked as a task in the app, and you have the option to add a comment if you need to be reminded of what that particular file backup includes. This will help you avoid situations where you back up files and folders and forget which ones are backed up.

Moreover, when mounting image files, they appear as virtual partitions you can browse through Windows Explorer. This is called a recovery environment, and AOMEI Backupper on Windows 7 and newer versions can set it as one of the boot options.

Lastly, the software keeps all the logs and can send email notifications, so it’s easy to keep track of your backups.

If you need to back up an iPhone or any other iOS device, AOMEI has another app called MBackupper. This is a completely free backup tool that can back up messages, contacts, and various multimedia files from your iOS device to a PC or another iPhone. It requires at least an iPhone 4, and you can quickly learn how to transfer data from iPhone to iPhone thanks to a tutorial on AOMEI’s website.

The free version of this backup software, the AOMEI Backupper Standard, should be sufficient for all your personal backup needs. That said, this option comes with certain limitations. More specifically, it lacks the option for system migration, CD/DVD writing, and some advanced features.

For that, you’ll need to purchase a one-time upgrade to the AOMEI Backupper Professional Edition. This is one of several premium licenses available and also the most affordable one. AOMEI Backupper Professional costs $49.95, and offers lifetime support and updates whenever a new version is released. It’s also faster and can run from the command prompt in case of Windows failure. Finally, purchasing any of the premium plans gives you access to 24/7 support.

Business users will want to look into one of the following four options:

The Workstation and Server plans are very similar to the AOMEI Backupper Pro. The only differences relate to LAN capabilities and the fact that the Server plan supports Windows Server operating systems.

Finally, the Technician and Technician Plus plans are designed for professionals who provide technical support via file backup tools for multiple computers. Suffice it to say, all business plans also come with 24/7/365 support and lifetime upgrades. AOMEI offers a free 30-day trial for all premium apps, so you can try them risk-free.

The pricing is a bit different for the MBackupper app, and it’s a completely separate purchase from the AOMEI Backupper desktop app. Here’s a quick breakdown of the pricing:

The MBackupper license isn’t a purchase-and-forget-it kind of deal - you have to manually set the Standard license to recurring. Arguably the best value is the Pro lifetime license, which grants free updates as long as you’re using the app. Similar to the Technician plans, the Tech license allows you to use MBackupper for commercial purposes.

As mentioned in the previous section, this app is designed for Windows only, and isn’t available on any other operating system. However, its compatibility is commendable, and a wide range of Windows users will be able to use the software.

In fact, it’s one of the rare file backup apps that still support the Windows XP operating system, which is also the minimum system requirement for running this software. You can also run it on Windows Vista/7/8/10, with Windows 11 support on the way. It runs on both 32-bit and 64-bit systems.

Since there are plans for servers, you can download AOMEI Backuper and install it on your Windows Server machines. With this edition, your server needs to be running at least Windows Server 2003. All newer versions are supported, along with Windows Server 2019 R2.

On the mobile side of things, MBackupper requires at least an iPhone 4 and runs on all versions of iOS up to the latest one. 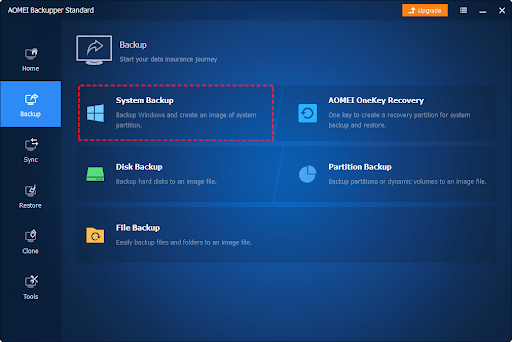 Backup software might be powerful and versatile, but it can often be confusing for novice users. Luckily, that’s not the case here, and learning how to use AOMEI Backupper only takes a few minutes.

The simple user interface makes everything easy to understand. You just have to look at the sidebar on the left. You can choose to back up music and other files, restore them, sync up with a previous backup, or clone a drive. Just click the tab, and you’ll be greeted with several large icons accompanied by clear descriptions. The font size leaves something to be desired, but that’s really the only downside of the UI.

As for the AOMEI iPhone backup app, it’s even more streamlined. There are only a handful of buttons on a single screen, and they’re pretty self-explanatory. In short, you don’t have to worry about making any mistakes, regardless of which operating system you’re using.

Online AOMEI Backupper reviews echo our disappointment with the absence of some of the most popular customer support channels.

Namely, you can only get in touch with support agents via email. There’s no live chat option on the website, meaning that you’ll have to wait for up to 24 hours before getting a response to your inquiries.

On the bright side, the website hosts many video tutorials and documents, outlining all the features and providing helpful tips on how to use the software in the most optimal way.

With AOMEI Backupper, professional and casual Windows users alike will definitely find a plan to suit their needs. Whether you need to make the occasional image backup of important data or need to set up scheduled backup tasks, this software has you covered.

That said, the praise we’ve given to AOMEI Backupper is well-deserved. Compared to many similar system backup apps, it’s fairly easy to use, versatile, and, best of all, completely free for personal use. While it may not be as quick at carrying out backup tasks as some of the alternatives, it gets the job done.

Is AOMEI Backupper any good?

Yes. It’s a very handy tool for all kinds of PC backups, partition cloning, and system restoration. You can try the free version out and see for yourself why it’s so highly rated.

Yes, the Standard edition of this software is completely free to use for as long as you like. That said, upgrading to one of the premium versions unlocks additional features and delivers greater speeds than what you get with the free version.

How much does AOMEI Backupper cost?

Aside from the free option, there are several premium versions with more features and licenses for commercial usage. The lowest AOMEI Backupper price is $39.95 for the Professional package, while the most expensive plan is $899.10, tailored to professionals who use these kinds of apps on servers.

Is AOMEI Backupper better than EaseUS?

Both apps have their pros and cons, with customers praising them for a variety of different reasons. Since both have free trials, we recommend trying out each one to determine which option is more suitable for your needs.

Is AOMEI good for cloning?

Yes. Our review of AOMEI Backupper points out that this is one of the tool’s strongest features. It’s capable of cloning whole drives and partitions, along with on-the-fly compression and version checking.