How To Type Special Characters on Mac - Express Yourself

Macs are great. They’re stylish, reliable, and the macOS interface is very streamlined. Maybe a bit too streamlined, though, as we often found ourselves wondering how to type special characters on Mac. There’s no pound or euro symbol anywhere on the keyboard, not to mention other more outlandish symbols.

As it turns out, typing pretty much any symbol on your Mac keyboard is a very simple process. Whether you need to type out the weird name of your new wireless router, tell your Spanish friend you’ll arrive in dos años, or want to add ™ next to your project’s name, our handy guide will help you out.

Even in the English language, you’ll often need to add accents, or diacritical marks, to your articles. Whether it’s for writing foreign names or giving your articles some flair by saying “voilà,” you won’t need to add new languages to your keyboard. Instead, here’s how to do accents on Mac.

There are two methods you can use, depending on how quickly you need to type and what kind of diacritics you require. The fastest way is by using Mac’s version of the Alt key called the Option key, along with the letter E. Press them together, and you’ll see an underscored ´ mark appear. After this, you just need to type, a, e, i, o, or u, and you’ve got yourself an á, é, í, ó, or ú symbol. But, those are just a tiny fraction of the available accents.

What if you need Spanish special characters or German special characters and accents when ordering an RTX 2080 card from abroad? The following is one of the coolest Mac keyboard shortcuts ever made, and it’s pretty fun to use. Just hold the button down until you see a pop-up and press the number corresponding to the diacritic you wish to use. This also works on Apple’s smartphones for music lovers and, in fact, all newer iPhones.

Here’s how to get all the accents:

Keep in mind that you’re not meant to press all three buttons at once. Instead, you should type the diacritics by pressing the combination of a specific character and the Alt/Option button first,  releasing both, and only then pressing the character you want accented.

How to Type Special Characters on Mac

Even after you’ve managed to remember all the basic shortcuts and key combinations, there is still a lot more to learn. There are hundreds upon hundreds of special characters, and these are just the ones you can use on the default English keyboard. The trick is, you guessed it, using the Option or Alt key again. Luckily, it’s not as nearly as complicated as it would be on Windows. Typing characters like the copyright sign or the Euro symbol takes no more than a few key presses instead of requiring downright arcane Numpad gymnastics.

There are several methods of typing special characters on Mac, starting with the aforementioned Option key. Every single character and symbol on your keyboard can be used in tandem with it, producing the British pound sign (£), the trademark sign (™), different mathematical symbols (≈, √, ∫, ≤, ≥), but also quick special characters from various languages (German ß, for example). Add the Shift key into the mix, and you’ll get access to twice as many characters, including more currency symbols, additional punctuation, and some very fancy characters like ◊. That one is called Lozenge, and it used to be on old calculators as a subtotal key. The more you know.

Anyway, here’s how to type special characters on Mac and what they represent:

Of course, this is just a small sampling of everything you can do just by typing on the Mac keyboard. Even with so many characters underneath your fingertips, we’re still far from everything you can actually type on a Mac. And if you’re not keen on remembering all of Mac’s special characters, there is a handy app that can help.

Since there are so many of them, it’s often hard to quickly find that single special character you need right away. Luckily, there’s an app for that. It’s called the Keyboard viewer and, depending on your macOS version, it might be enabled by default. If not, here’s how to do it:

That’s one part done. Now let’s look at how to type special characters. Firstly, move the cursor to the right side of the menu bar and click on the Input menu icon. From the drop-down menu, choose “Show Keyboard viewer.” You should see something like this: 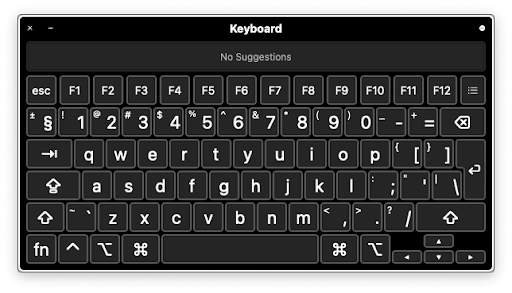 You can use this virtual keyboard to type special characters and check which keyboard symbols are enabled by which button combination. You can also use it with predictive text enabled. If you see an orange outline on some of the keys, that means they can be used to type even more special symbols on Mac. Believe it or not, that’s not all!  There’s another layer of extra symbols and characters on your computer. Since we’ve already enabled the virtual keyboard, there’s just one more step required to see all of the hidden symbols you can type in on your Mac.

Love them or hate them, emojis have become a quick and easy online and mobile communication method. The cute little pictograms instantly relay emotion, work as in-jokes, or help with conveying ideas faster. Macs have a hidden emoji keyboard containing a bunch of emojis, sorted in different categories like smileys, nature, travel, symbols, and more. 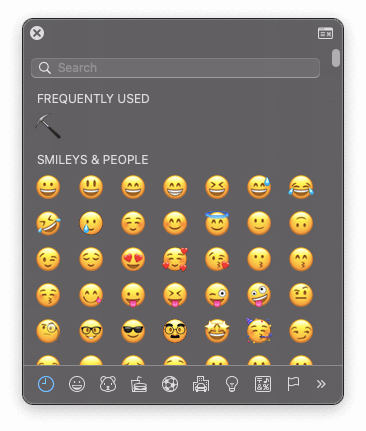 To use the emoji keyboard, make sure that the app you want to use emojis or hidden Mac symbols on is in focus. Then, press Control, Command, and Space simultaneously or select “Show Emoji & symbols” from the Input menu. This will open a small window with all the emojis. You can move that window around and expand it to show the special character keyboard by either clicking its top-right corner or clicking on the >> symbol in the lower right corner. Apple’s iOS devices have this menu integrated into their keyboards, making them excellent smartphones for kids and teenagers who use emojis and special characters a lot.

With these tools and tricks, you’ll know how to get special characters on Mac quickly and have thousands of symbols and characters at your fingertips.

How do you use a special key on a Mac?

Either by opening the Keyboard viewer or using a combination of Option and Shift keys, you can type out thousands of characters on your Mac.

How do you do accents on a Mac keyboard?

The simplest way is to press and hold the letter you want to be accented. A pop-up will offer you a selection of alternative letters with various accents. Press the corresponding number of the desired character, and that’s it. If you want a more detailed look at how to type letters with accents on Mac, check out our full guide above.

How do you type special characters on a keyboard?

There are two methods for that. The simpler one is to use the Alt or Option key combined with other buttons on the keyboard. You can add in Shift to the combo for even more characters. Alternatively, you can open up the Keyboard viewer for manual typing or use your gaming microphone to dictate the character to Siri.

What is the Alt key on Mac?

It is the Option key on Mac. It is sometimes called the Alt key due to sharing the Alt key’s placement on Windows and some similar features that the two keys share. macOS also uses a Command key, but if you’re wondering how to type special characters on a Mac, you won’t need to worry about it: the Option/Alt key does everything you’ll need.

iPhone 7 Plus vs iPhone 8 Plus - Which Apple iOS is Better ?
Read more